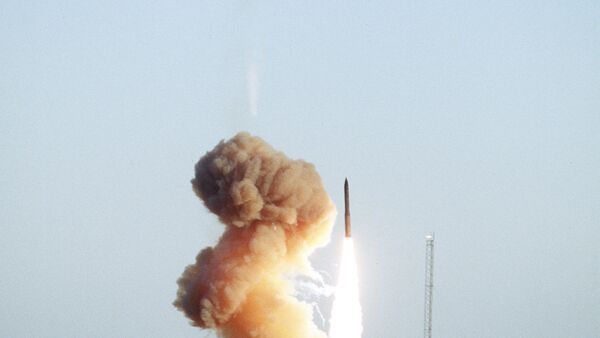 © Wikipedia
Subscribe
MOSCOW (Sputnik) - The United States has not shown any specific evidence of Russia's violation of provisions of the Intermediate-Range Nuclear Forces (INF) Treaty, Russian Deputy Foreign Minister Sergey Ryabkov said in an interview with the Kommersant newspaper.

"We strongly reject the US accusations of treaty violations by Russia. These accusations continue to remain completely ungrounded. For the five years of discussing this problem, the United States has not presented any concrete evidence of our guilt," Ryabkov said.

Moscow Will Take Steps to Boost Security When US Leaves INF Treaty - Putin
Moreover, Washington, through bilateral channels at a high political level, confirmed to Russia that the decision to withdraw from the INF Treaty was final, Sergey Ryabkov said.

"Washington stated publicly in October that it would withdraw from the treaty. Through bilateral channels, we received a confirmation at a high political level that this decision was final and was not an invitation to dialogue," Ryabkov said.

"We are forced to proceed from the fact that regardless of the opinion and actions of Russia, the other participants of the INF Treaty and third countries, the United States will purposefully move towards its denunciation," he said.

He said Russia would respond to US deployment of intermediate- and shorter-range missiles threatening the country in case the United States quit the INF.

Meanwhile, Moscow has not received a response from Washington to the proposal to discuss disagreements on the terms of compliance with the INF Treaty at the level of military, Ryabkov stressed.

Russian Missile Forces Taking Into Account US Possible Withdrawal INF Treaty
Russia does not believe demonstration of the 9M729 missile to alleviate the US concerns would be justified from the political and technical viewpoints, Sergey Ryabkov said.

"As for the missile's demonstration, the INF Treaty does not demand this from us.. Thus, the demonstration of the missile to the Americans would be a manifestation on our part of increased transparency — beyond the treaty framework. At this stage, we did not have the feeling that such a step would be justified from both the political and technical points of view," Ryabkov said.

Ryabkov also emphasized that the demonstration of the missile would be an undesirable precedent amid US insistent attempts to get information about Russian missile developments.

"Even assuming that Washington and its allies have no such plans today, we cannot rule out the emergence of such ideas and plans tomorrow — taking into account deep deterioration of security conditions in the Euro-Atlantic, the steady anti-Russian sentiment of the US Congress and the prevailing Russophobic manifestations in NATO," Ryabkov told the Kommersant newspaper, when asked whether Moscow believed the assurances of NATO and the United States that they had no plans to deploy medium-range and short-range missiles in Europe.

Agreements with Western states do not guarantee anything, the deputy minister noted.

"It is clear that political agreements and even legally binding agreements also cannot give a full and indefinite guarantee in the current environment, as we see with the example of the withdrawal from the INF Treaty by Washington," the diplomat said.

The Russian Foreign Ministry has said that the 9M729 missiles correspond to Russia's obligations under the INF Treaty and have not been upgraded and tested for the prohibited range. Moscow has repeatedly pointed out that the United States provided no proof that Russia in fact violated the treaty by deploying the missiles.

US Official: 60 Days Given to Russia on INF Treaty 'Not Ultimatum'
The INF Treaty was signed in 1987 by former President of the Soviet Union Mikhail Gorbachev and then-US President Ronald Reagan, who agreed to destroy all cruise or ground-launched ballistic missiles with ranges between 500 and 5,500 kilometers (310 and 3,400 miles). The INF treaty has an unlimited duration and each side can terminate it by providing compelling evidence to substantiate its decision.
Russia and the United States have repeatedly accused each other of violating the treaty.

Moscow, in particular, stated that the United States was deploying launchers for Tomahawk missiles in Romania and Poland, which is prohibited under the agreement.