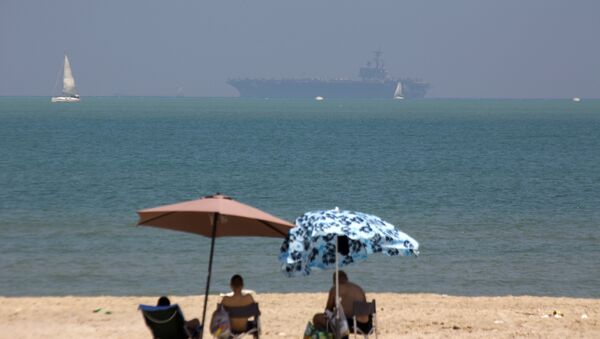 The US Navy said it may halt operations in Haifa once a Chinese firm takes over the port in 2021, following an agreement with Israel’s national security cabinet.

Haifa, the largest port city in Israel, has regularly hosted US-Israeli naval drills and American ships. However, the 2015 agreement between Israel’s Transportation Ministry and Shanghai International Port Group (SIPG), which is partly state-owned, could cast a shadow of doubt over the future of the US-Israeli partnership, the Jerusalem Post reported.

World
Iranian Cleric Says Tel Aviv, Haifa to Be Destroyed If Israel Acts Foolishly
The agreement grants SIPG control over the port for 25 years beginning in 2021. The company paid $2 billion for the project and reportedly plans to transform the port’s bay terminal into the largest harbour in the country.

A representative of the US Sixth Fleet said that the partnership with Israel remains “steadfast”.

“For now, there are no changes to our operations in Israel. I can’t speculate on what might or might not occur in 2021.” the commander added.

US Guided Missile Destroyer Ross Departs Haifa, Israel After Port Visit - Navy
According to sources familiar with the matter, US defence officials privately shared concerns with their Israeli counterparts, while the Israeli government has agreed to a “review of the agreement at a high level,” among members of the inner cabinet.

Earlier, retired Admiral Gary Roughead, ex-chief of US naval operations, warned that a Chinese-run seaport in the bay could force the navy to dock its warships elsewhere.

“The Chinese port operators will be able to monitor closely US ship movements, be aware of maintenance activity and could have access to equipment moving to and from repair sites and interact freely with our crews over protracted periods,” Roughead said during a conference last month at the University of Haifa.

The seaport is also not far from an Israeli navy base, where Israel hosts its submarine fleet; and, according to sources, China’s shipping operations will be in close proximity to the fleet, thus posing a serious security risk.

The Israeli Prime Minister’s Office, Transportation Ministry and Foreign Ministry declined to comment on the future of the Haifa port deal.