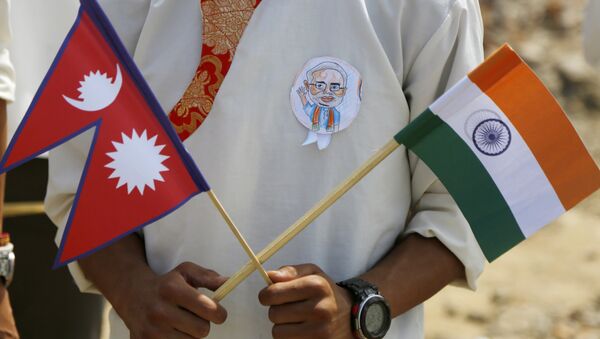 The government of Nepal is reportedly disappointed over what it describes as India's "dilly-dallying approach" in reviewing the 7-decade-old Peace and Friendship Treaty which Kathmandu considers "unequal", as it infringes upon the country's sovereignty. An official in the Nepalese government told Sputnik that India is yet to acknowledge the report prepared by the Eminent Persons Group (EPG) appointed by the two countries to make recommendations on making suitable amendments to the treaty.

"India is unwilling to receive the EPG report even five months after the EPG team finalized the report. Sushma Swaraj vowed to receive the report as early as possible when she met our PM KP Oli in New York in September. They have not received yet", a source in the Nepalese government told Sputnik.

Sources added that the report was finalized in July this year and that the group, comprising four members from each side, sought an appointment with Indian Prime Minister Narendra Modi to formally submit the report.

Indian PM Modi to Participate in Nepal’s Traditional Hindu Procession
After the Indian PM accepts the report, it is to be submitted to Nepalese Prime Minister K.P. Sharma Oli. The report comprises suggestions that are non-binding and it is up to the two governments to implement the suggestions.

Earlier in 2014, Modi had assured the Nepalese Constituent Assembly that India would review the terms of the 1950 Friendship Treaty.

"In Nepal, people want to see amendments in 1950 Peace and Friendship Treaty. Many feel that it has infringed upon Nepal's sovereignty and freedom of choice. It has become a big issue since its signing back in the 1950s. The treaty was signed at the time of exit of Rana oligarchy in Nepal. Hence, the last Rana PM Mohan Sumsher ratified the treaty with the hope that it would help him retain power", Santosh Ghimire, senior journalist with the Kathmandu-based Republica told Sputnik.

However, as India is looking at general elections in April-May next year, Nepali officials are not very hopeful that Narendra Modi will accept the report at this juncture.

000000
Popular comments
The 1950 treaty states India as the protector of Nepal, hence Nepal shouldn't allow any foreign military on its soil. However, for taking loans from China, seems like one of the preconditions is that If Nepal cannot repay it's debt in given time then it would cede a part or whole of its territory to China(like the 99 year lease of Hambantota, SL) for military use. Now they need to revisit the 1950 treaty on behalf of Chinese and India is simply ignoring the recommendations until the pro China government loses from power(like Maldives).
Majnu
13 December 2018, 22:45 GMT
000000
Newsfeed
0
New firstOld first
loader
LIVE
Заголовок открываемого материала
Access to the chat has been blocked for violating the rules . You will be able to participate again through:∞. If you do not agree with the blocking, please use the feedback form
The discussion is closed. You can participate in the discussion within 24 hours after the publication of the article.
To participate in the discussion
log in or register
loader
Chats
Заголовок открываемого материала
Worldwide
InternationalEnglishEnglishMundoEspañolSpanish
Europe
DeutschlandDeutschGermanFranceFrançaisFrenchΕλλάδαΕλληνικάGreekItaliaItalianoItalianČeská republikaČeštinaCzechPolskaPolskiPolishСрбиjаСрпскиSerbianLatvijaLatviešuLatvianLietuvaLietuviųLithuanianMoldovaMoldoveneascăMoldavianБеларусьБеларускiBelarusian
Transcaucasia
ԱրմենիաՀայերենArmenianАҧсныАҧсышәалаAbkhazХуссар ИрыстонИронауОssetianსაქართველოქართულიGeorgianAzərbaycanАzərbaycancaAzerbaijani
Middle East
Sputnik عربيArabicArabicTürkiyeTürkçeTurkishSputnik ایرانPersianPersianSputnik افغانستانDariDari
Central Asia
ҚазақстанҚазақ тіліKazakhКыргызстанКыргызчаKyrgyzOʻzbekistonЎзбекчаUzbekТоҷикистонТоҷикӣTajik
East & Southeast Asia
Việt NamTiếng ViệtVietnamese日本日本語Japanese中国中文Chinese
South America
BrasilPortuguêsPortuguese
NewsfeedBreaking
06:03 GMTSecond Day of Appeal Hearing on Julian Assange's Extradition
06:02 GMTDanish PM Faces Impeachment for Deleting Her Messages Related to Slaughter of 15 Mln Mink
05:37 GMTBritons Hit the Streets to Protests Against 'Spiking Epidemic' in UK Nightclubs - Photos
04:15 GMTParis Sends Warning to Two British Boats Fishing in French Waters as Post-Brexit Tensions Soar
03:55 GMTNASA Solves Problem of Urine Leaks in Toilet Aboard Inspiration4 Spacecraft
03:42 GMTNot a Unicorn! Take a Look at NASA's Newly Released Photo of Nebula That Resembles Godzilla
03:18 GMTCOVID-19 Cases Continue to Decline in Florida as Immunity Increases
03:04 GMTAin't Afraid of No Ghosts: Americans Willing to Live in 'Haunted' Houses For Discount, Survey Shows
02:29 GMTTexas AG Paxton Files Amicus Brief for Facebook's 'Vague and Inaccurate' Interpretation of Law
02:19 GMTDemocratic Governor Whitmer Faces Backlash For Once Again Violating COVID-19 Policies
01:53 GMTHackers Breach, Leak Personal Data of Israeli Defense Ministry Servicemembers, Emails of Benny Gantz
01:07 GMTChina Seeks Upgrade of ASEAN Relationship to Comprehensive Strategic Partnership at November Summit
00:50 GMT‘Don’t Mess With Your Grandmother’: Prince William Recalls Dispute With The Queen Over Wedding Look
00:19 GMTShiba Strong! Netizens Demand Robinhood to Declare Soaring Shiba Inu Coin Cryptocurrency
00:14 GMTBiden Admin. Bars Immigration Arrests at Schools, Hospitals, Places of Worship
YesterdayASEAN Urged to Recognize Myanmar’s Ousted National Unity Government After Snubbing Junta Chief
YesterdayHackers Breach US National Rifle Association, Threaten to Release Stolen Files - Reports
YesterdayFC Barcelona Fires Ronald Koeman as Club Coach
YesterdayBiden Admin. Dodges Standard Regulatory Rulemaking to Rush Vaccine Mandate
YesterdayGerman Intelligence Detected No Foreign Interference in Parliamentary Elections