Putin: Terrorists' Chemical Attack in Aleppo Must Not Remain Unpunished 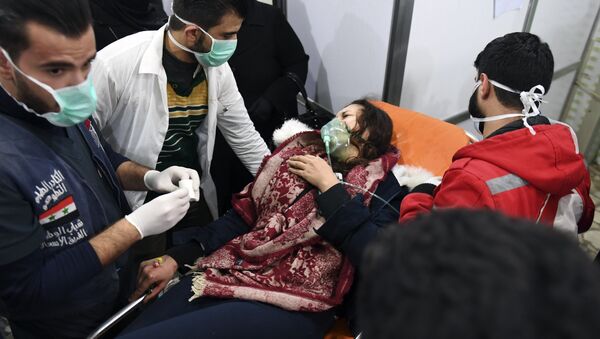 "In Syria, where militants continue armed attacks on government forces, a November 24 attack on residents of the western part of Aleppo using chemical poisonous substances, presumably chlorine, was a blatant violation of the ceasefire," Putin said, speaking at a BRICS meeting on the sidelines of the G20 summit.

According to Putin, dozens of Syrians were injured, including children.

"Such terrorists' crimes should not left unpunished, otherwise they will replicate such antics," said Putin.

Russian Jets Hit Targets at Militants' Staging Ground for Aleppo Chemical Attack
Putin's statement was made hours after Russian Center for Syrian reconciliation reported that terrorists from the Hayat Tahrir Ash-Sham group (former Nusra Front*) were planning a new provocation with the use of toxic agents in the Idlib de-escalation zone.

The attack which Putin mentioned occurred on November 24, when terrorist groups located in the Idlib de-escalation zone fired 120-millimeter shells at the north-western districts of Aleppo from the south-eastern part of the demilitarized zone, according to the Russian Defence Ministry's Centre for Syrian Reconciliation.

The shells were filled with poisonous substances, and exploded in the vicinity of Nile Street in the Al-Khalidia neighbourhood.

According to medics, aid had been provided to 73 civilians injured in the attack.

Nusra Front* is a terrorist group banned in Russia

000000
Popular comments
Waiting for FUKUS to drop a hundred missiles on the terrorists to show them the error of their ways. Will I live long enough to see it or am I just dreaming??