Houthis Ready for Talks in Sweden, But Ask UN for Security Guarantees 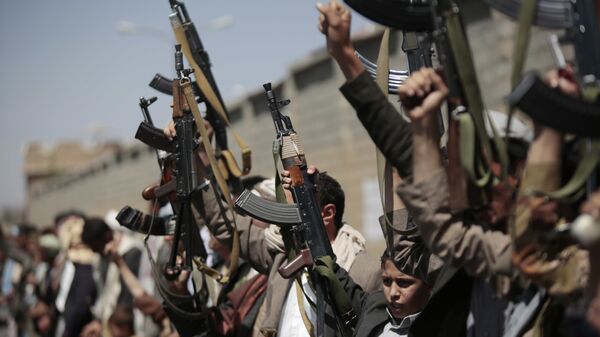 © AP Photo / Hani Mohammed
Subscribe
International
India
Africa
MOSCOW (Sputnik) - Houthis are ready to take part in talks on Yemen in Sweden, but demand that the UN resolve the issue of providing the aircraft, issuing the permit for its departure and the delegation's security, a representative of the Ansar Allah Houthi organization told Sputnik.

"There are preparations that the UN should do by the date [December 6], they are connected with the arrival of the delegation from Sanaa to Sweden in terms of providing the aircraft, permit and guarantees of security for the delegation, transportation of those wounded and other things," the member of the political bureau of the Ansar Allah Houthi organization Fadl Abu Talib said.

US Senate Advances Resolution to End Support for Yemen War
Talib further noted that the prospective talks on Yemen in Sweden would last 7-10 days.

The move comes after the US Senate Foreign Relations Committee passed a resolution on Wednesday to end US support for the Saudi coalition's war against Yemen. The step brings the Senate closer to ending US support for the three-year war in Yemen, which has created a humanitarian catastrophe in the country, pushing millions to the brink of starvation and allowing cholera to thrive.

Last week, UN Special Envoy for Yemen Martin Griffiths said that Yemen's Houthi rebels have agreed to hold discussions aimed at providing to the United Nations the main role in the country's port of Hodeidah.