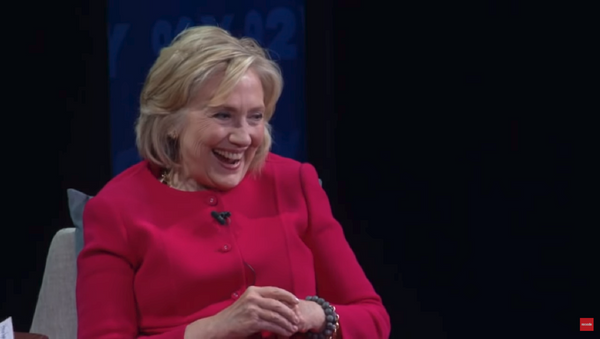 © Recode
Subscribe
International
India
Africa
Hillary Clinton once more dodged a question on Tuesday about whether she will run for US president in 2020.

Clinton made her comments on the first stop of her and her husband Bill’s speaking tour in Toronto on Wednesday.

“Actually, Frank, I am thinking about standing for parliament here in Canada,” Clinton said when asked by Frank McKenna, the former Canadian ambassador to the US, whether she will run.

She also didn’t miss a chance to criticize US President Donald Trump, who was Clinton’s opponent in the 2016 presidential election, over the US reaction to Washington Post journalist Jamal Khashoggi’s murder, which has caused tension in Washington’s relationship with Saudi Arabia. The CIA has concluded, according to the Washington Post, that Saudi Crown Prince Mohammed bin Salman ordered the killing, which took place October 2 in the Saudi consulate in Istanbul. Clinton said that the president and his allies “have their own personal commercial interests” in that case, likely referring to arms deals the US has made with Riyadh.

Last month, the former US Secretary of State said that she “would like to be president” when asked whether she wants to run again in 2020.

'Hillary Clinton and People Like Her are Detached from Reality' - Scholar
Earlier reports by the Wall Street Journal on the matter cited one of Clinton's former advisers, Mark Penn, who wrote in an op-ed earlier this month that Clinton will make another bid for the presidency in 2020.

“True to her name, Mrs. Clinton will fight this out until the last dog dies. She won’t let a little thing like two stunning defeats stand in the way of her claim to the White House," Penn wrote.

Social media users were quick to react, as this is not the first time Clinton has declined to provide a straight answer on whether she will run once more for the presidency.

Hillary Clinton's response to being asked if she was running in 2020. pic.twitter.com/fki9S29YP0

Please run. I have a phone full of memes. pic.twitter.com/OrtFQLpkDx