'Hillary Clinton and People Like Her are Detached from Reality' - Scholar 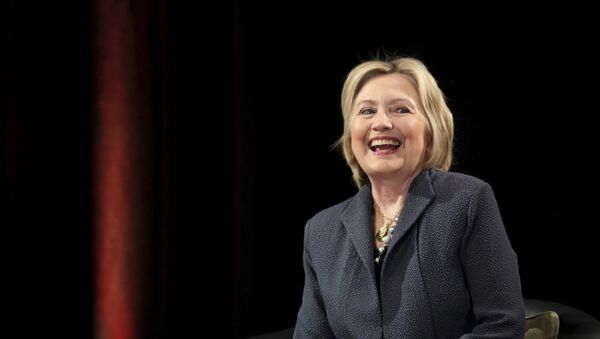 Sputnik: Clinton is known as a vocal proponent of the Libya intervention in 2011, which is seen as a prelude to the migrant crisis in Europe. With this in mind, what is your take on her comments?

Adriel Kasonta: If we go back to the interview conducted by The Guardian newspaper with Hillary Clinton, Tony Blair and Matteo Renzi from Italy, we can see clearly that people can now say that politicians have no backbone. Because if we read this interview it is all about crisis management, and figuring out how the political tribe of the central left can win votes over the right-wing politicians or whatever. So it is slightly strange that politicians who are Democrats, those like Hillary Clinton who were inviting immigrants and were strong supporters of immigration to America and to Europe, are now changing their stance and saying that it didn't work out so we should try something else.

Hillary Clinton Shamed for Libya Incursion as She Schools EU on Migrant Crisis
I would like also to point out the article that I've written for the Forbes where I was suggesting to Mrs. Angela Merkel to change her stance towards open door policy. I was accused of being a fascist, Nazi, and also a right-wing person, but the whole idea of migration is not about winning in the polls in your country in Europe and in North America. This clearly proves that Hillary Clinton and people like her are detached from the reality. The problem with migration and people voting for Trump in the first place or voting for Brexit, yes, indeed they were displeased and they're scared of mass migration, but what was the cause of the migration to Europe and to America? The foreign interventions of the Western countries, which were supported by both Tony Blair, a strong supporter of war in Iraq, as well as Hillary Clinton.

I don't understand why she's putting the blame on ordinary people, accusing populism on her losing the presidential race in the United States and trying how to figure out how to get back the power. It's beyond one's comprehension if you see the wording, the linguistics of the interview conducted by the PR agency, The Guardian news by conducting this interview is doing a social study on how to collect the data, on how to manipulate and how to win the votes.

So it is all about winning the votes, they don't care about the people who are suffering there, people who are struggling to get out from the war zones in the Middle East in order to save their lives, to save their children. Probably some of them get the opportunity to get into Europe, into the Western world in order to do something dodgy, but what the main problem and what the main idea of this is, is that those people are suffering, and it is interconnected with the foreign policies of the Western governments and the moods within the European Union and the United States. This is a very poor condition and this is very tragic, and it is very sad that these high-profile politicians, all they care about is being in the office.

Sputnik: Mrs. Clinton‘s comments have been viewed as an attempt to appease right-wing leaders. What is your take on this?

Adriel Kasonta: She's trying to cure the problem with the same stance as the right-wing politicians, so in my view, automatically, the so-called right-wing politicians or those who are supporting the anti-immigration moods in Europe and in America are winning, because she's using the same rhetoric as they were using from the very beginning. So she's not honest with those statements of curbing the immigration in Europe, she's just trying to figure out how to return to power.

And I'd like to point out Professor Andrew J. Bacevich's opinion article for Politico magazine, written in 2015, titled 'The George W. Bush refugees' where he's stating that, and I'm quoting here, "as immigrants pour into Europe, Americans must bear the blame". So if she's giving advice to European people that we need to curb the immigration, if she is a serious strategist and if she's an honest person, let her asses the foreign policy of her own country before Donald Trump, because now everyone is attacking Donald Trump, and believe me, I'm not a supporter of Donald Trump, but at the same time we have to be fair and understand that this refugee problem goes way back before Donald Trump emerged as a leader in the United States and it goes back way before the Brexit talks started here in this country.

So as Jeremy Corbyn is saying, as Bernie Sanders is saying, as many people on the left and the right, including Peter Hitchens, who's a popular writer on politics and current affairs in this country and he's a high Tory conservative, the foreign policy, the misguided foreign policy in the Middle East is the crucial problem, this is the problem. The migration is an outcome, it's not a problem, it's an outcome of the foreign policy of interventionism of the Western states, including America under Bill Clinton.