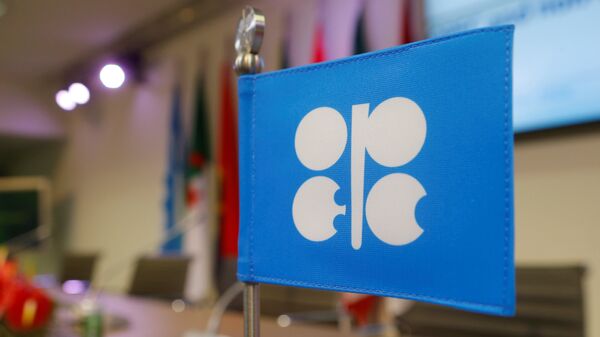 © REUTERS / Heinz-Peter Bader/File Photo
Subscribe
International
India
Africa
Saudi Arabia is considering another round of coordinated curbs to the oil output of OPEC member-states in connection with the rapid plunge in international oil prices this month.

Kristian Rouz — Pressure is mounting on the international oil cartel OPEC to implement yet another output cut as Brent oil benchmark slumped to a year low. Global crude supply is projected to outpace the demand yet again, with the world's top three producers — the US, Russia, and Saudi Arabia — now pumping roughly one-third of international consumption,

"Oil bears have re-asserted their authority," Tamas Varga of London-based PVM Oil said. "The weakness is the continuation of the prevailing bearish sentiment aided a little bit by the stronger dollar."

In this light, Saudi Arabia has renewed its push to curb the global oil supply by some 1.4 mln bpd in order to prevent a supply glut.

World
OPEC, US Policies May Swing Oil Prices Within $60-80 Range - IEF Chief
The Saudis have been concerned with the rising US production and exports, which appear to have offset the majority of risks to international energy markets — including the recent renewal of US sanctions on Iran, an acceleration in global manufacturing, and disruptions in international trade.

OPEC is now expected to implement new supply cuts after its upcoming meeting on 6 December. Cartel officials observed the international oil prices have slumped some 20 percent this month alone, meaning additional policy steps could be necessary to prevent another massive oil bust.

Moreover, according to a recent report from the International Energy Agency (IEA), non-OPEC oil output alone is expected to increase by 2.3 mln bpd this year. For its part, global oil demand is only set to rise by 1.3 mln bpd next year — bringing on a realistic possibility of a supply glut.

"We expect that OPEC will manage the market in 2019 and assess the probability of an agreement to reduce production at around 2-in-3. In that scenario, Brent prices likely recover back into the $70s," commodities analysts Martijn Rats and Amy Sergeant of Morgan Stanley wrote in a note.

READ MORE: US is Unable to Balance Global Oil Market, It's 'Beyond Their Control' — Prof

For his part, Saudi Arabia's Energy Minister al-Falih said he isn't seeking to flood the global market with oil. He explained the recent increase in crude production as a precautionary step taken ahead of the US sanctions against Iran — which went into effect earlier this month. At that point, many energy analysts had expected oil prices to spike, but effects of the sanctions have so far been subdued.

US Reviewing Anti-OPEC Bill as Trump Urges Saudis to Lower Oil Prices - Reports
Saudi Arabia's oil output has risen to nearly 11 mln bpd this month as the kingdom has sought to substitute Iran among some of the Islamic Republic's customers. However, Iranian officials have said they were still exporting oil this month — as a US crackdown is poised to comes into effects on a gradual basis.

Meanwhile, in the US, the Energy Information Administration (EIA) said domestic oil production has increased for the ninth consecutive week to more than 1.9 mln bpd. Moreover, US oil inventories have added 4.9 mln bbl.

This comes as Texas' Permian and Eagle Ford, as well as North Dakota's Bakken oilfields saw a dramatic increase in production this year considering the high international oil prices and a massive influx in investment.

However, some energy investors have expressed concern the decreasing oil prices could trigger a new bust in US production.

"It is reasonable to compare the current economic and supply/demand picture with the one four years ago. After all, it was in November and December 2014 when oil prices fell more or less to the same level where they are now," PVM's Varga said.

Meanwhile, the looming Saudi output cuts, as well as the mounting pressure on Iran pose the risk of a sudden upswing in oil prices. Energy market volatility has recently surged to above 60 percent, its highest since the end of 2016, reflecting rife uncertainty in regards to the future of oil prices.