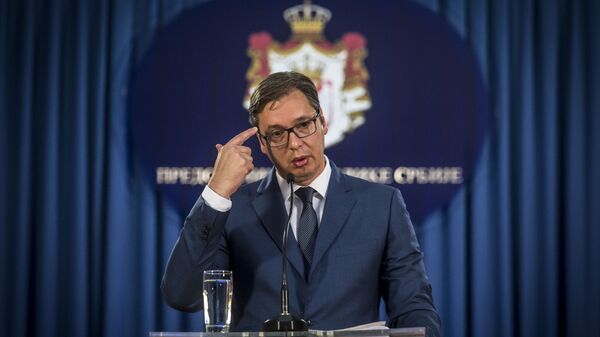 BELGRADE (Sputnik) - Serbian President Aleksandar Vucic has informed the Russian and Chinese ambassadors to the country of Kosovo's authorities' decision to impose 100-percent duties on the Serbian imports and discussed with the diplomats the possible adverse effects of the step, the presidential press service said in a statement on Wednesday.

"President Vucic informed [Russian Ambassador Alexander] Chepurin and [Chinese Ambassador] Li [Manchang] of Pristina's recent irresponsible decision to impose tariffs on Serbian goods and asked them to brief President [of Russia Vladimir] Putin and [Chinese President] Xi [Jinping] on it. President Vucic has also told ambassadors Chepurin and Li that Pristina's actions led to complete destabilization of the entire region and might result in further escalation of the conflict," the statement said.

Violation of CEFTA: EU Urges Kosovo to Scrap Duties on Serbian, Bosnian Imports
According to the statement, the two ambassadors, in turn, expressed support for Serbia's efforts to resolve the situation with peaceful means and agreed to maintain daily contact with Belgrade over the current crisis.

Vucic has also urged Kosovo to drop steep customs duties on imports that he said was a "de facto ban on trade."

"I ask you to revoke your decision. We should sit down and agree a deal and compromise. You need to negotiate with us. Americans or anyone else won’t help you," Vucic said.

The Serbian leader has ruled out responding in kind but warned Kosovo it could face a shortage of goods, including medicine, and a rise in consumer prices. He will meet with Kosovo Serb leaders on Thursday to discuss the move.

West Urges Serbia to Stop Diplomatic Activities Against Kosovo Recognition - FM
"Serbia will not respond with any countermeasures because it wants to remain a reliable partner in the region and in Europe and in the world. We will not stop trucks, but we want to show the difference between responsible and irresponsible behavior," Vucic said at a press conference.

Earlier on Wednesday, Kosovo imposed 100-percent import duties on all products originating from Serbia and Bosnia and Herzegovina under the pretext of the two countries' hostile approach toward the self-proclaimed republic.

The Kosovo War of 1998-1999 between the ethnically Kosovar Albanian forces and the former Yugoslavia, then consisting of Serbia and Montenegro, ended after the UN-backed international intervention following NATO's bombing of Yugoslavia’s forces.

In 2008, Kosovo unilaterally proclaimed independence from Serbia. Even though over 100 UN member states have officially recognized Kosovo, Serbia, alongside Russia, China, Israel and several other countries, have not recognized the move.