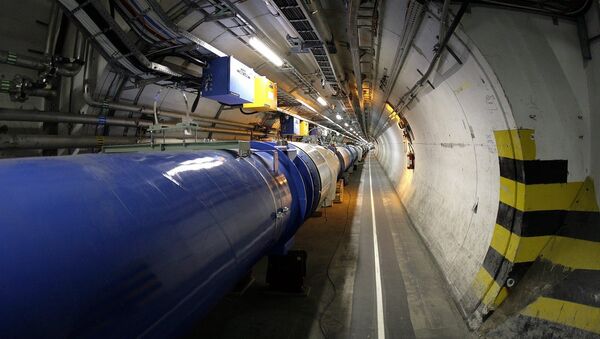 "At the LHC, we just raised the energy a little bit, from 13 TeV to 14 TeV and then increased the intensity of the beams. You know, we are bombarded all the time by cosmic rays, and no accelerator on Earth can ever achieve the energy and intensity of those cosmic rays. And we are still there, it is more than safe, there is no problem," Gianotti said, answering a question about the possible LHC-related risks.

Science & Tech
Particle Accelerators May Spawn Black Hole or Shrink Earth - Astrophysicist
From January 2019, the LHC will be suspended for a two-year period to upgrade it and boost the accelerator's power.

The LHC, the world's largest and most powerful particle accelerator, was set up in 2008 with the view of gaining an insight into the mystery of dark matter. It consists of a 27-kilometre (17-mile) ring of superconducting magnets with several accelerating structures increasing the energy of particles.

Russia's Participation in the Upgrading

"We have a very strong participation of Russian scientists. We have about 1,000 scientists coming from Russia, so this is the second largest contingent from non-member state. Russian physicists and engineers are really excellent, really very high level. And, of course, we hope that their contribution can continue. We are currently upgrading the Large Hadron Collider, so we need Russia to be on board with us in this project," Gianotti said.

From January 2019, the LHC will be suspended for a two-year period to upgrade it and bring the accelerator to a power of 14 TeV.

The CERN expects to get clarity from Russia on ratification of the international cooperation agreement later this week, the director-general said.

"The international cooperation agreement is in the hands of Russia. It was approved by the CERN Council and now Russia is to ratify it. We are going to Russia at the end of this week to meet [First] Deputy Minister [of Science and Higher Education Grigory] Trubnikov and I hope that we will have news then," Gianotti said.

SHiP Chief: Russian Scientists to Study Beauty Quarks at CERN
The meeting will most likely be held on Friday, she added.

At the meeting, the parties will discuss future scientific cooperation between Russia and the CERN, including Russia's contribution to the LHC, participation in experiments, as well as how the CERN can support projects in Russia, Gianotti said.

The Director-General also announced that the scientists may decide by 2020 to create the largest ever particle accelerator.

"We are now starting — at the beginning of next year — a process which is called update of the European Strategy for Particle Physics. This is a process lasting about 1.5 years when the European particle physics community get together to develop a strategy and a roadmap for the coming years. It typically takes place every 6-7 years to take stock of what's up for previous years, the projects that CERN is developing in terms of a future collider, like CLIC [and] FCC, but also other projects in terms of antimatter facility… All this will be discussed in that framework, and then priorities will be established. So we will know in 2020 what the priorities are," she said.

The FCC is not yet an approved project, she stressed.

"CERN, at the moment, is developing at the level of design studies two possible versions of accelerators. One is a linear collider, electron-positron collider called CLIC. And the other one is a circular collider called the Future Circular Collider, FCC," she said.

Gianotti believes that the best discovery at the Large Hadron Collider (LHC) would be to detect the particles that make up the dark matter.

"Regardless and irrespective of the awards which are important, of course, but we are doing a science for the sake of improving our knowledge. Of course, for me, the best possible discovery at CERN will be if we could discover the dark matter particle, the particles that constitute the dark matter. But everything is in the hands of nature. We do not know what kind of new physics or new particles nature has decided to put in the energy of the LHC, or at higher energy that will need a future collider," she said.

Gianotti recalled that in 2019 and 2020 the LHC will be temporarily stopped in order to carry out work to upgrade the accelerators and transfer it to a higher power level from 13 TeV to 14 TeV. "In 2021 we will see hopefully very nice physics," she concluded.