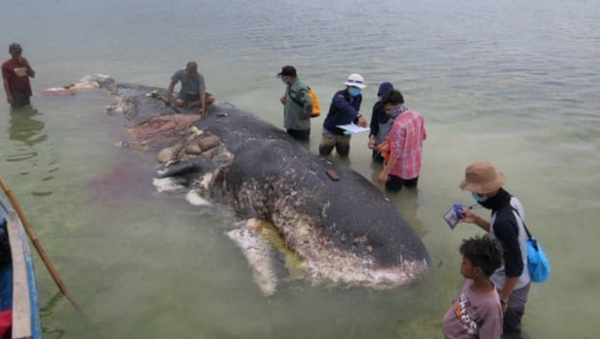 A whale found dead in Wakatobi National Park in Indonesia’s Kapota Island had about six kilograms of plastic waste and garbage inside its stomach, park officials said Tuesday.

A group of researchers from the Academy of Marine Fisheries Communities in Wakatobi and the World Wildlife Fund (WWF) identified the animal as a sperm whale on Sunday. A release from the Indonesian Environment and Forestry Ministry revealed that the whale was 9.5 meters long and 4.37 meters wide.

​When the researchers opened up the whale's stomach, they uncovered 115 plastic cups, 19 plastic pieces, four plastic bottles, 25 plastic bags, six wood splinters, two rubber sandals, one nylon sack and more than 1,000 pieces of plastic rope, according to a tweet by WWF-Indonesia. There was a total of 5.9 kilograms of garbage inside the whale.

The cause of the animal's death is unknown, and it will be buried on Kolowawa Beach in North Kapota village on Tuesday, according to Heri Santoso, the head of the park, the Star Online reported.

A 2015 report by Ocean Conservancy (a nonprofit environmental advocacy group based in Washington, DC) and the McKinsey Center for Business and Environment found that China, Indonesia, the Philippines, Vietnam and Thailand contribute to 60 percent of plastic waste in oceans.

​In March, a video by a British diver swimming through piles of rubbish off the coast of Bali went viral. Rich Horner was swimming off Manta Point, a famous diving location about 20 kilometers from the popular tourist island. The sight was "horrifying," according to the diver.

​In March, Indonesia, which is currently the second-largest plastic polluter in the world, with the first place going to China, pledged $1 billion to decrease marine plastic debris by 70 percent by 2025, Channel News Asia reported Tuesday.

"The discovery of 13 pounds of trash in a whale's stomach shows us all how harmful garbage can be. Efforts such as bans on plastic straws are a good first step, but because each year, the commercial fishing industry slaughters up to 3 trillion fish and abandoned fishing equipment kills and mutilates millions of other sea animals, PETA encourages people who care about marine life to look not just at what they throw away but also at what they eat — and to go vegan," People for the Ethical Treatment of Animals (PETA) President Ingrid Newkirk told Sputnik Tuesday.