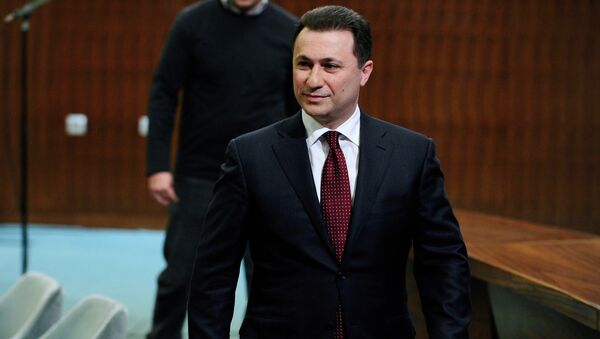 © AP Photo / Boris Grdanoski
Subscribe
BELGRADE (Sputnik) - Former Macedonian Prime Minister Nikola Gruevski, who was sentenced to two years in prison and sought asylum in Hungary, will be returned to Skopje, the incumbent head of the republic’s government Zoran Zaev promised on Saturday.

"Everything will be as I said. I am telling you that Gruevski will be returned! Because international law and laws are on our side. He will be returned!" Zaev said on air of the Alsat-M broadcaster.

Those involved in Gruevski's escape will also be held responsible, he added.

Zaev's statement follows Friday media reports, citing a police source, that Gruevski had fled to Hungary via the territory of Albania, Montenegro and Serbia with the help of Hungarian diplomats. Hungarian Foreign and Trade Minister Peter Szijjarto told his Macedonian counterpart Nicola Dimitrov on Thursday that Gruevski had applied for asylum in this country.

Analyst on Macedonia Name Change: 'It Definitely Will Be Done'
In May, Gruevski, who served as prime minister from 2006 until 2016 and is also the former head of the largest opposition VMRO-DPMNE party, was convicted of official misconduct by purchasing a luxury vehicle at an estimated cost of over 500,000 euros ($563,400).

On Monday, the Macedonian authorities issued an arrest warrant for the politician after the court turned down his appeal and ordered him to start serving his prison term immediately. However, Gruevski’s whereabouts have been unknown since November 8.

The police were looking for the former head of government at home and in the office of his party. On Tuesday, Gruevski wrote on Facebook that he had received numerous threats and was in Hungary, where he asked for political asylum. On Wednesday, the office of the head of the Hungarian government, Viktor Orban, confirmed that the former prime minister of Macedonia had applied for asylum.