Under Pressure: May Defends Brexit Deal in House of Commons Amid Tories Revolt 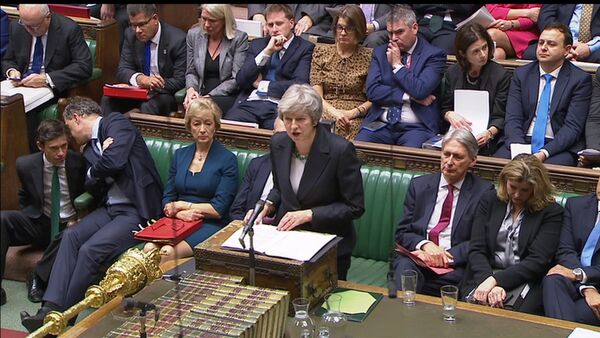 BRUSSELS (Sputnik) - UK Prime Minister Theresa May spent nearly three hours in the House of Commons on Thursday defending the Brexit deal her Cabinet had approved a day earlier while resignations from her fellow members of the Conservative Party were trickling in.

May has repeated time and again that her government would deliver the wish of the British people, who voted to leave the European Union. She reiterated that there would not be a second referendum.

However, the lawmakers were critical of a 585-page document, a culmination of over a year of negotiations, agreed by EU and UK negotiators on Tuesday and approved by the UK Cabinet on Wednesday.

UK Brexit Secretary Dominic Raab announced earlier in the day he would be stepping down. Brexit Parliamentary Under-Secretary of State Suella Braverman, Secretary of State for Work and Pensions Esther McVey, and junior minister for Northern Ireland Shailesh Vara said they would leave. Rehman Chishti said he would step down as the vice chair of the Conservative Party and as a trade envoy to Pakistan.

The Irish border backstop was cited in several resignation letters.

To avoid a hard border between Northern Ireland and the Republic of Ireland, the two sides agreed on a backstop solution that will only be launched if no agreement on the future EU-UK relationship has been reached by the end of the transition period that is set to last through December 2020. At the same time, the transition period itself could be extended if the sides are not ready to move forward by July 2020.

The backstop solution, which keeps the United Kingdom in the EU customs union, has been a contentious point with many, although May has stressed this safety net would not necessarily be used.

How Fragile is May's Position?

Steven Woolfe, a member of the European Parliament and a strong Brexit supporter, believes that May is the one who should resign.

"We are counting the resignations from May's government, but the only resignation that will really matter is that of the Prime Minister herself. The Conservatives must find the guts to sack her," Woolfe told Sputnik.

IMF Reiterates Need for UK, EU to Reach Deal to Avoid Cliff-Edge Brexit
Several Conservative lawmakers said Thursday that they had written to Sir Graham Brady, the chairman of the 1922 Committee, asking for a vote of no confidence.

Such a vote can be organized if 15 per cent of the Conservative lawmakers write to the 1922 committee chairman requesting it. If the committee receives the required 48 letters and decides to proceed with the vote, May will need to win a simple majority to retain her office. If she wins, the party cannot call for another vote for a year.

The recent agreement is a breakthrough, but the draft deal still has to clear several hurdles. Even May's victory in a potential no-confidence vote would not guarantee that the deal is accepted. The vote on the deal at the UK Parliament will be an important test, whose result is currently hard to predict. However, the deal will need approval from Europe as well.

Janice Atkinson, a vice chair of the Europe of Nations and Freedom Group (ENF) at the European Parliament, told Sputnik the deal was not what the United Kingdom had voted for.

"I have urged [Europe of Freedom and Direct Democracy] EFDD's Italians, ENF and Socialists in the EU to work together to stop this at EUCO [European Council]. We can do it… That is not what the British voted for at the referendum," Atkinson said.

Marcel de Graaff, an ENF co-chair, supported Atkinson's call for the revision of the draft agreement.

"Our Group supports the results of the Brexit referendum in which the British people have decided to leave the European Union. The indefinite and ambiguous nature of many of the provisions in the withdrawal agreement prepared by the negotiators, however, lead to concern. We support our colleague Janice Atkinson in demanding a revision of the withdrawal agreement to deliver clarity and to ensure that the decision of the British people to leave the EU will be fully respected and delivered," de Graaff told Sputnik.

Meanwhile, Donald Tusk, the president of the European Council, told reporters on Thursday that Brussels was ready for several scenarios: a final deal to be reached in November, no deal, or even no Brexit.

Let me say to our British friends: as much as I am sad to see you leave, I will do everything to make this farewell the least painful possible, both for you and for us. #Brexit

If nothing extraordinary happens, we will hold a #EUCO to finalise and formalise the #Brexit agreement on Sunday 25 November at 9h30.