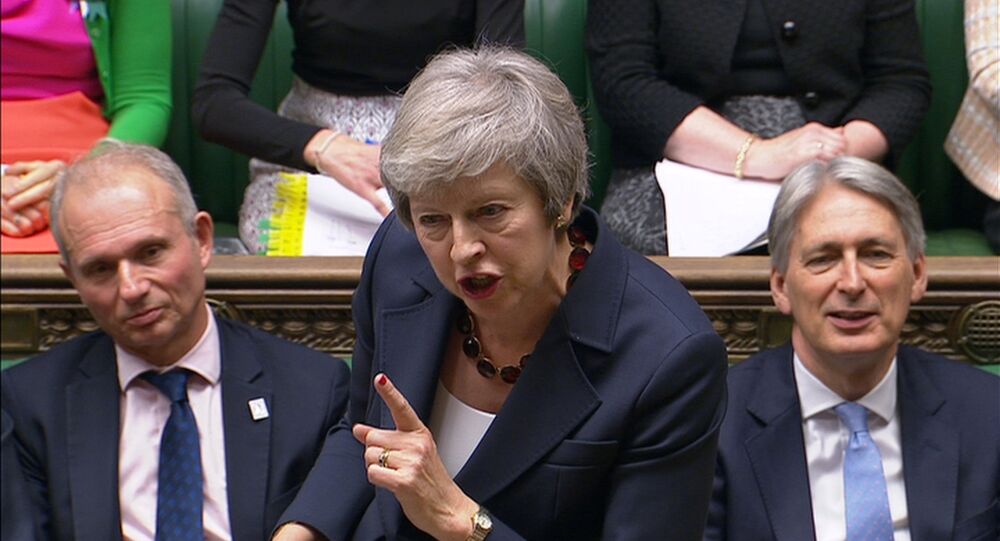 A number of UK ministers has left the government amid disagreements over the controversial draft Brexit deal with Prime Minister Theresa May after she managed to secure the cabinet's support of the agreement.

Following in the footsteps of the UK Northern Ireland minister, Brexit Minister Dominic Raab has also announced his resignation from the government. The announcement almost immediately affected the British currency, with the pound plunging.

"I regret to say that, following the Cabinet meeting yesterday on the Brexit deal, I must resign… For my part, I cannot support the proposed deal for two reasons," Raab said in his resignation letter posted on Twitter.

As the Telegraph revealed later, citing its sources, Secretary of State for Environment, Food and Rural Affairs Michael Gove has been offered the position of the Brexit minister. Meanwhile, Theresa May's spokesman stated that new ministers would be appointed in the usual way. That is the only official statement on the issue made so far.

Shortly after, the Evening Standard reported that Gove has turned down the Brexit Secretary position.

Raymond Chishti, the Vice Chairman of the British Conservative Party has followed his example, announcing resignation. In a letter addressed to Prime Minister Theresa May, he explained the reasons for the move.

"The terms of the backstop, in effect, the amount in my view to a hybrid membership of the EU Customs Union and Single market and further the EU would hold a veto over our ability to exit," Chishti wrote in the letter. "The UK in effect will be a part of a system where it will be a rule taker without any say on the rules."

At the same time, other officials joined the wave of resignations: Ranil Malcolm Jayawardena, a British Conservative Party politician, resigned as Parliamentary Private Secretaries (PPS) at the Ministry of Justice, the Daily Telegraph reported.

BREAKING Sixth resignation from Government in five hours (four ministers, two ministerial aides). Ranil Jayawardena resigns as PPS at the Ministry of Justice tells Theresa May: ""This is not taking back control".

Earlier in the day, Northern Ireland minister Shailesh Vara, who backed Remain campaign in the EU referendum, has left his post in the UK government.

"With much sadness and regret I have submitted my letter of resignation as a Northern Ireland Minister to the Prime Minister. A copy of my letter is attached. It has been a joy and privilege to serve in the Northern Ireland Office and I will always cherish the fondest memories," Vara said.

Shailesh Vara was appointed Minister of State at the Northern Ireland Office on July 23, 2018; previously he served as Parliamentary Undersecretary of State.

"The Government is falling apart before our eyes as for a second time the Brexit secretary has refused to back the Prime Minister's Brexit plan," said Jon Trickett, a member of Labour leader Jeremy Corbyn's senior team.

Vara and Raab have been followed by Esther McVey, the work and Pensions Secretary, who has also decided to resign from May's cabinet. Shortly after, Junior Brexit Minister Suella Braverman joined the top officials, who left the UK government.

At the same time, some conservative lawmakers, including eurosceptic Jacob Rees-Mogg, are mulling to put in a letter of no confidence later Thursday.

Commenting on these plans, Alistair Burt, a junior minister in Britain's Foreign Office, urged his Conservative colleagues on Thursday not to submit letters of no confidence in Prime Minister Theresa May.

"Please don't. We have a leader, she's worked incredibly hard on the most difficult deal," he stated.

© AFP 2021 / Nicholas Asfouri
Brexit More Divisive for Britain Than Iraq War - Former UK PM Gordon Brown
The moves come after UK Prime Minister Theresa May announced that UK Cabinet had approved draft Brexit agreement with the EU after 5-hour talks. The draft deal would be submitted to the parliament for review.

The same day, EU chief Brexit negotiator Michel Barnier revealed the contents of the provisional Brexit deal, with the accord including agreements on citizens' rights, future trade cooperation and Irish border issue, among other things.

READ MORE: UK Prime Minister May: Time is Running Out, Brexit Talks 'In the Endgame'

The draft agreement text says that the UK can request the extension of the transition period at any time before July 1, 2020. The transition may be extended by mutual consent. London and Brussels have been engaged in Brexit talks since June 2017.

The European Council will hold a meeting to finalize a Brexit agreement on November 25 as long as nothing unforeseen happens, the council's president, Donald Tusk, said Thursday after a meeting with the chief EU negotiator for Brexit, Michel Barnier.