Authorities Arrest Man Who Wanted To Start a US ‘Race War’ 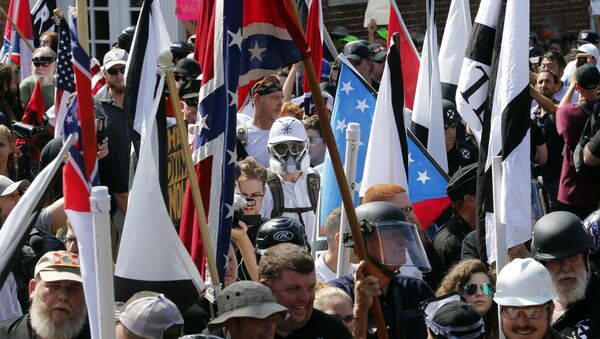 Police in Washington, DC arrested a 30-year-old man on Friday after his family tipped off authorities to him wanting to start a “race war” in the United States.

The man's prominence in the alt-right movement and connections to other white nationalists were quickly uncovered.

Jeffrey Clark and his brother Edward Clark's social media pages are colored with threats against protesters, journalists and minorities and idolize Dylann Roof, a white supremacist who killed nine people in a Charleston, South Carolina, church in 2015.

The family said the brothers wanted to "expedite" a "race war in the US." They contacted authorities after Jeffrey's behavior became more and more indicative of his openness to commit violence against black people and Jews.

They attended the Unite the Right rally in Charlottesville in August 2017. FBI witnesses say Jeffrey was photographed next to James Alex Fields there, according to the affidavit. Fields has been charged by the Department of Justice for ramming his car into a group of protesters, killing one.

Photographs also show the brothers marching into the protest in a group led by William Fears, an accused domestic abuser who was charged after he allegedly encouraged a fellow alt-right protester to shoot at counter-demonstrators. That charge was eventually dropped, however.

The Clark brothers were also at a protest organized by Richard Spencer outside of the White House in April 2017. At that protest, Edward was asked whether he was a fascist, to which he replied ‘no,' that he is a Nazi.

Edward killed himself on October 27, just hours after Robert Bowers killed 11 people in a synagogue in Pittsburgh, Pennsylvania, the deadliest massacre of Jews in US history.

Edward can be seen in footage from that April 2017 protest in the beginning of a scuffle after a protester knocks a cell phone out of his hand.

In May 2017, the brothers were hired by former pro-Trump operative turned One America News Network host Jack Posobiec to film a movie he was shooting about slain Democratic National Committee staffer Seth Rich, who was killed in Washington, DC's Bloomingdale neighborhood, where the Clarks resided.

Posobiec is a documented liar and political hoaxer who pushed the Pizzagate conspiracy and conspiracy theories about Rich's death. One researcher focusing on the alt-right and neo-Nazi movements has told the Huffington Post that Jeffrey Clark had told him that Posobiec was aware of his Nazi beliefs and was "sympathetic" to them.

He had also threatened to put a Huffington Post reporter "feet first into a woodchipper," a threat police never responded to.

Jeffrey and Bowers had chatted with one another on Gab, a social networking website for the fringe right.

After his brother's death, Jeffrey told his family that he had connected with Bowers on Gab and that police may be asking questions. He also told his family that the victims "deserved it" because a gay "Jewish couple was having an adopted baby circumcised that week," court documents say.

Clark went on Gab to characterize the massacre as a "dry run for things to come" and add that "the f**king k**es that got shot by the hero #RobertBowers were all supporters of pedophilia."

"Every last one of them deserved exactly what happened to them and so much worse," Jeffrey wrote.

"At some point if a line gets crossed, I would be violent," Jeffrey told his family, court documents say. "Everyone has a line."

Edward shot himself with a pistol. Investigators uncovered the gun with eight additional rounds in the magazine, and an additional two magazines of ammunition with 20 more rounds.

The extra ammunition caused concern for Edward's relatives: they believed he had initially planned a mass shooting. "They believed he may have planned to commit an act of violence on the day that he died," the FBI court filing says.

Jeffrey was arrested on gun charges and charges relating to the possession of firearms while using or addicted to a controlled substance. Officers found tools at his residence used to consume crystal meth, a drug he posted about using online.