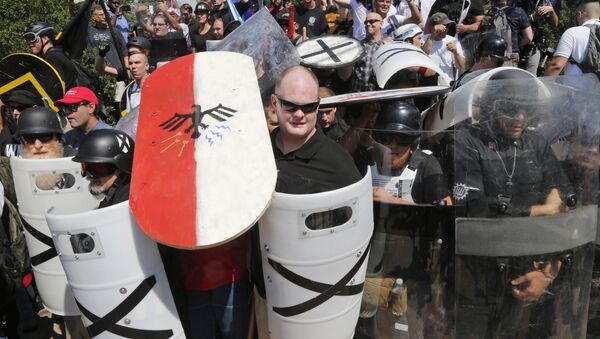 © AP Photo / Steve Helber
Subscribe
International
India
Africa
Federal prosecutors announced on Tuesday that charges have been filed against four members of a white supremacist organization in connection to violence in Charlottesville, Virginia, in August 2017.

The four men, who all hail from California, were "among the most violent individuals present" at the protest, dubbed Unite the Right. They have been arrested on rioting and conspiracy charges and will be extradited to Virginia to face trial.

"We are here today to announce the arrest of four members of the militant white supremacist group known as the Rise Above Movement, or RAM, for committing various acts of violence in connection with the August 11 and August 12, 2017, Unite the Right rally in Charlottesville," US Attorney Thomas Cullen said.

RAM was initially profiled by ProPublica, which was the first to identify three of the four men indicted. "The news organization ProPublica did, in my view, a fantastic job," Cullen said, adding that the organization's research aided the investigation.

The Unite the Right protest in Charlottesville started on August 11 with a torch-lit march during which participants chanted Nazi slogans such as "blood and soil." Participants also gave Nazi salutes and attacked student counter-demonstrators at the Thomas Jefferson monument at the University of Virginia. The following day, the level of violence increased, with several brawls, beatings and a car attack that injured 19 and killed left-wing protester Heather Heyer.

Those arrested — Cole White, Benjamin Daley, Michael Miselis and Thomas Gillen — are accused of violence over the course of those days. Daley and Gillen chanted "Jews will not replace us" at the torch-lit rally prior to attacking counter-protesters.

After the ProPublica investigation, Miselis was fired from his job at the American defense contractor Northrop Grumman. Video shows him shoving a black protester to the ground and throwing punches at him.