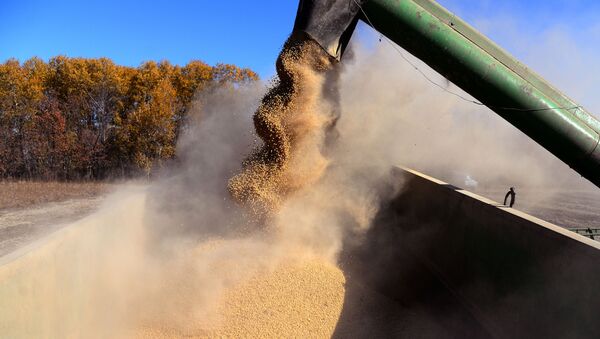 "Soybeans are a very popular crop in China. The Chinese market is huge as they import about 95 million tonnes of soybeans annually, including 30 million tonnes from the United States," Medvedev said.

Given the current trade problems that have arisen between China and the United States, a certain part of the soybean trade has remained unfulfilled.

The official also noted that Moscow has agreed with Chinese partners "to be more actively present in this segment [of trade]", which provides Russia with "a good opportunity, on the one hand, to enter the Chinese market with our products, including soybeans, and, on the other hand, to increase the production of soybeans in our country, specifically in the Far East because this is the region where soybeans are grown."

Analyst on US-China Trade War: Trump Brags About Things He Doesn't Know End Of
The prime minister added that he discussed exporting Russian agricultural products to China with Chinese officials. Until recently, there have been certain restrictions in this area, the prime minister recalled, referring to deliveries of poultry meat and dairy products.

Medvedev noted that "Russia and Chinese partners are gradually removing these restrictions," adding that the Russian delegation had signed two joint protocols regarding the issue during his trip.

Chinese-US relations deteriorated in late May when US President Donald Trump announced that $50 billion worth of Chinese goods would be subject to 25 percent tariffs in a bid to fix the US trade deficit with China. Since then, the two countries have exchanged several rounds of trade duties, with negotiations proving to be unsuccessful.