Caracas has been looking to wean itself off of the US-dominated financial institutions and instruments, ditch the dollar and turn to euros and the yuan for international settlements month amid multilayered US sanctions Venezuelan officials have described as "illegal."

The Venezuelan government is looking to repatriate 14 tons worth of gold bars worth about $550 million from the Bank of England out of fear that the holdings may be affected by US sanctions, Reuters reports, citing two sources said to have direct knowledge of the situation.

According to one of the sources, the Bank of England has expressed an interest in what exactly Venezuela plans to do with the gold. The shipment back to Caracas has been held up for nearly two months, with a source saying the holdup has to do with the difficulty in obtaining insurance for such a large shipment.

"They are still trying to find insurance coverage, because the costs are high," the official said, without clarifying which side is responsible for the holdup. The Bank of England and the Venezuelan Central Bank did not respond to a request for comment from Reuters. 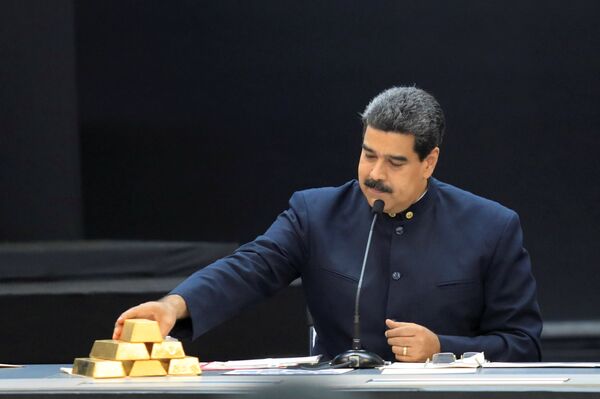 Venezuela's President Nicolas Maduro touches a gold bar as he speaks during a meeting with the ministers responsible for the economic sector at Miraflores Palace in Caracas, Venezuela March 22, 2018
© REUTERS / Marco Bello

Bolton Praises Bolsonaro, Calls Venezuela, Cuba, Nicaragua 'Troika of Tyranny'
Last Thursday, US President Donald Trump imposed new sanctions against Venezuela, prohibiting US companies and individuals from buying the Latin American country's gold, prompting Venezuelan President Nicolas Maduro to accuse Trump of "schizophrenia" and to vow that Caracas would not "kneel down before American imperialism." According to Maduro, the Venezuelan government is in the process of certifying 32 gold fields which would turn Venezuela into "the second largest gold reserve on Earth." With both public and private sector investment, the government is also building 54 gold processing plants.

Last month, Venezuelan officials vowed to make all future transactions in international trade in euros, yuan and "other convertible currency" instead of the US dollar due to the crippling economic and financial sanctions imposed on Caracas by Washington.

In recent years, Venezuela has faced an acute economic crisis accompanied by hyperinflation, the devaluation of the national currency and shortages of goods in stores. Winning a second term in office in May 2018, President Nicolas Maduro promised to make economic recovery one of the government's top priorities. However, US sanctions on Venezuelan debt have compounded issues facing the country's problem-ridden oil sector.

According to an October article in the Financial Times, Venezuela and its state oil company PDVSA have defaulted on nearly all their commitments to bondholders over the past year and are now billions in arrears on their combined traded debt of about $60 bln.