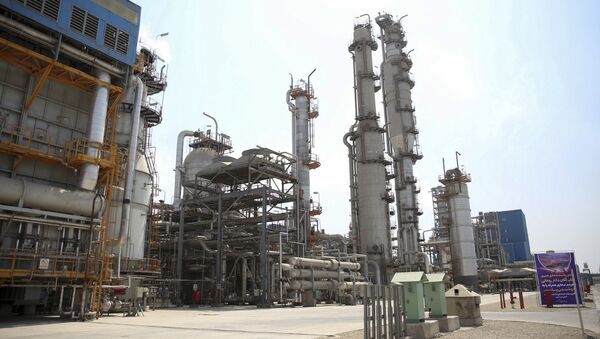 MOSCOW (Sputnik) - Iranian Oil Minister Bijan Zangeneh has called on the Organization of the Petroleum Exporting Countries (OPEC) to halt the work of the Joint OPEC-Non-OPEC Ministerial Monitoring Committee (JMMC) adding that the committee and the Joint Technical Committee (JTC) have violated the initially outlined targets.

"Given the performance of the Secretary-General recent months, we have regrettably noticed that these two committees have deviated from their initial objectives for which they were established… IIn my view, continuation of the activity of these two committees does not secure the collective interests of the OPEC, and as long as the mandate and missions of these two committees are not thoroughly defined and approved by the OPEC Conference, their activities are not justifiable, and therefore, they should immediately stop their work," the letter said as quoted by Shana news agency.

A new batch of US sanctions targeting Iran's oil trade, shipping and banking came into force on Monday.

In an attempt to stabilize the oil prices, OPEC and several non-OPEC oil producers signed the oil output cut deal in Vienna in 2016. The states agreed to cut oil production by a total of 1.8 million barrels per day. The agreement, which came into effect in 2017, has been extended twice since then and will remain in force until the end of 2018.

On September 23, the JMMC gathered in Algiers to discuss the implementation of the commitment to boosting production by 1 million barrels per day due to over-compliance with the deal over the falling output risks in Iran and Venezuela. However, no specific steps to boost oil production have been announced.