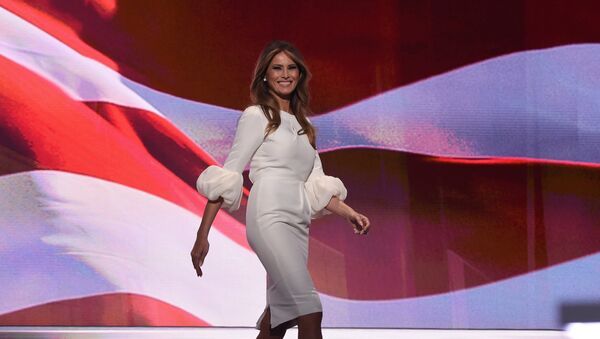 © AFP 2023 / TIMOTHY A. CLARY
Subscribe
International
India
Africa
Over the weekend, President Donald Trump lauded his wife Melania for being a great first lady, and acknowledged that it was not easy to be FLOTUS while being married to him. But it seems that Melania has been successfully handling her role, having once again shown loyalty to her husband.

The First Lady of the United States Melania Trump has largely steered clear of politics in the run-up to the midterms, but just a few days before Election Day she seems to have joined her husband’s crusade against the Democrats and fake news.

In a fundraising email sent by the Republican National Committee on Saturday, Melania called on Americans to support President Donald Trump to “help prove that the Democrats and media are wrong.”

“Democrats and the opposition media are doing everything they possibly can to discredit Donald with false accusations by spreading their fake news and making it appear that he does not have the support of America’s voter,” FLOTUS wrote in the email.

Donald Trump on Melania: It's Not Easy to be FLOTUS When 'You're Married to Me'
The letter continued: “This is a battle we must win together. I’m asking you and other Americans across the country to personally register your support and help prove that the Democrats and media are wrong.”

Until now, the first lady had been more focused on promoting her Be Best initiative, which deals with issues such as child welfare, opioid abuse and online bullying.

Last month, she embarked on her first solo tour of Africa, having visited four countries in five days to advance children’s well-being issues, such as education, hunger, poverty, and disease.

The midterm elections to the US Congress are set to be held on November 6, with all 435 seats in the House of Representatives and one-third of the Senate being up for grabs.

On Friday, a White House spokesperson announced that the US first family had already cast their votes via absentee ballots in New York “a few weeks ago.”