Washington, Ankara Lift Sanctions on Top Officials After Release of US Pastor 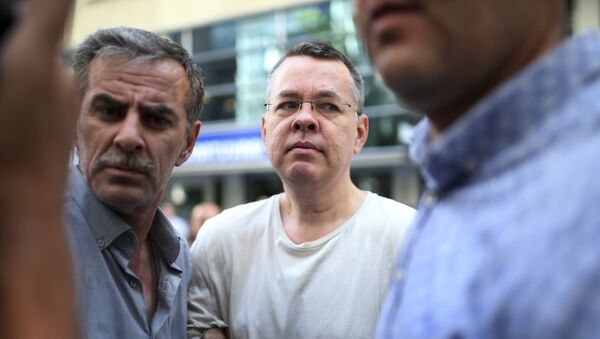 WASHINGTON (Sputnik) - The United States has lifted sanctions imposed on two senior Turkish officials over the detention of an American pastor who was released and returned to the United States earlier this month, the Treasury Department stated.

According to the Office of Foreign Assets Control’s (OFAC) website, Turkish Justice Minister Abdulhamit Gul and Interior Minister Suleyman Soylu are no longer on the Global Magnitsky Act sanctions list.

The two Turkish officials were accused of human rights violations and sanctioned in August in response to the detention of American Pastor Andrew Brunson, who was released on October 12.

The sanctions on Kirstjen Nielsen and Jeff Sessions included a travel ban to the country and freezing of assets in Turkey.

READ MORE: Brunson's Release 'a Win for Trump, But Not a Big Win' — Turkish Analyst

‘Supernatural Wisdom’: Trump Welcomes Freed Pastor Brunson to the White House
Relations between Ankara and Washington have soured in recent years over the case of US Pastor Andrew Brunson, who was detained in Turkey in 2016, among other issues.

Andrew Brunson was arrested in 2016 over his alleged ties to Gulen, and was accused of plotting the 2016 failed military coup in Turkey. The pastor was released from prison in July, only to be moved to house arrest. He received permission to walk free after a court in Izmir ruled he did not have to serve any more jail time.