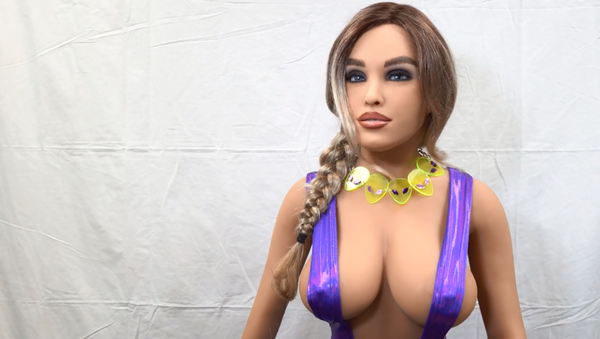 © Screenshot/Eve's Dreams
Subscribe
International
India
Africa
A new sex robot brothel is expected to open in California's West Hollywood next year, offering locals the chance to take their relationship with technology to the next level.

Unicole Unicron, the CEO of Eve's Robot Dreams, told the Daily Star in an article published Thursday that her establishment will offer interested individuals the opportunity to "experience cutting edge technology in a clean and futuristic environment."

​"Everything from the lighting to the furniture is designed to transport you into a fantasy world where you can explore things you never thought you'd get a chance to explore," Unicron told the outlet.

"Often times men treat these dolls the same way a child treats their dolls… They dress them up and have entire conversations with them. I personally don't think it's too weird, just an aspect of childhood being fulfilled."

One of the prized services offered by Unicron is allowing guests the chance to take a bot's virginity for the hefty price of $10,000.

​"The concept of virginity will always be appealing in society where women are highly sexualized while their sexual purity is simultaneously held in high regard," the self-described robot ethicist told the publication. "Everyone is clamoring to be the first person to sleep with these robots because it is truly a historical act."

According to Unicron's crowdfunding campaign on Indiegogo, Eve's Robot Dreams will be the "first consent-focused robot brothel in the world." It adds that guests can get to know their bot of choice by downloading the Realbotix app before the pair — or trio — make their way to a private room.

"Contributing to Eve's Robot Dreams will help build a world where robots are treated with the respect they deserve, thus not contributing to a potential robot rebellion in the future," the page's bio states.

This latest brothel development comes after Toronto-based KinkySdollS was barred from setting up shop in Houston, Texas, by the Harris County Commissioners Court. Yuva Gavriel, the founder of KinkySdollS, first revealed his interest in establishing his business in the Lone Star State in September. Just a few weeks would pass before his business plans would ultimately be squashed by Houston officials in late October.