Woman Blows Herself Up in Center of Tunisian Capital (PHOTOS) 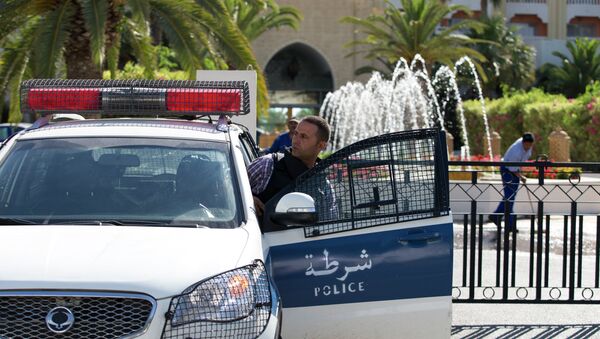 No terrorist group has claimed responsibility for the incident yet.

A woman in her 30s blew herself up in the center of the Tunisian capital Tunis on Monday injuring nine people, the Tunisian Shams-FM radio reported.

The Tunisian Interior Ministry confirmed the reports specifying that the incident was a "terrorist explosion".

According to local TV reports, the eight of the wounded were police officers and one is a civilian. All those wounded were taken to city hospitals.

A spokesman for the local police told Sputnik that the blast was carried out by a woman who died on the spot.

Later, Mosaique FM reported, citing the police, that the suicide bomber was identified as 30-year old Tunisian citizen named Mona. However, there was no official comment by the police on the issue. Law enforcement, as quoted by the media, are conducting searches at her apartment and the area around it.

In addition, the preliminary reports stated, the explosion that hit the central Habib Bourguiba avenue, was a result of a suicide-bombing attack. The police have cordoned off the site of the incident.

The Daily media noted that the blast occurred close to a police van and not far from a hotel, at around 1.50 p.m. local time.

#Tunisia- initial, still unconfirmed, reports of an explosion along Habib Bourguiba avenue in Central #Tunis.
Further unconfirmed reports claim this may have been caused by a female suicide bomber. pic.twitter.com/GfmvFYGo0v

In addition, the media cited the eyewitnesses as saying that the woman was wearing a suicide vest.

Commenting on the incident, a Tunisian activist and journalist, Samiyah Bulhadi, told Sputnik that "the activists have been warning thousands of times during the last two years that terrorists are agitating and training women. Now we see how great the cost of this neglect is."

"The blast serves as an announcement from terrorists that they are returning to the political stage in Tunis," he said

The activist added that the terrorists considered that  they "can stop the development process in Tunis, but they are mistaken."

This year, a number of attacks targeting police have been reported in Tunis. In general, al-Qaeda* in the Islamic Maghreb and extremists from Libya that have ties with Daesh* terror group pose the biggest threat in the state.