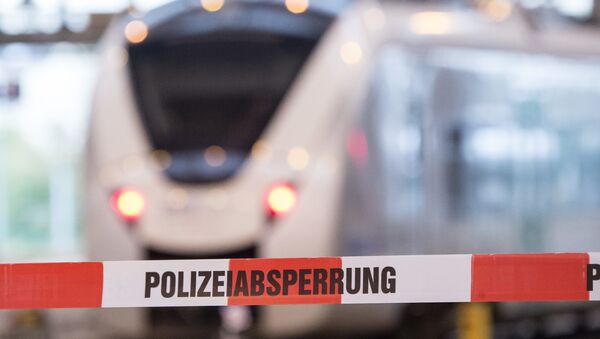 Somebody allegedly meddled with the ICE high-speed rail track in Bavaria early in October. The German media reports that threatening letters in Arabic as well as an Arabic graffiti have been found at the crime scene, although their connection to the terror attack plot hasn’t been clarified.

Ludwig Waldinger, spokesman of the Bavarian regional criminal office has confirmed to the German outlet Bild that an incident on the ICE line between Nuremberg and Munich took place on October 7.

The outlet reports that a locomotive driver of the ICE 529, traveling from Dortmund to the Bavarian state capital, heard a suspicious noise at night. After he checked the railcar at Munich Central Station, he noticed that the windshield was damaged, the local outlet Presse Augsburg reports.

The police investigation has reportedly discovered that a steel rope was allegedly found stretched over the tracks of the ICE line. Its traces were allegedly found on the tracks, as well as wood and iron parts the perpetrators might have put on the rails.

READ MORE: Migrant Suspect in German Stabbing Attack Was Due for Deportation in 2016

Additionally, the investigators reportedly came across a threatening letter in Arabic as well as graffiti with Arabic characters.  Bild reports that this message threatened Germany with terror attacks. The evaluation of the message is still under way, according to Presse Augsburg. It hasn’t been confirmed that the allegedly discovered messages are connected to the meddling with the track.

The investigation has been taken over by the State Attorney General and the Bavarian Central Office for Countering Extremism and Terrorism (ZET).