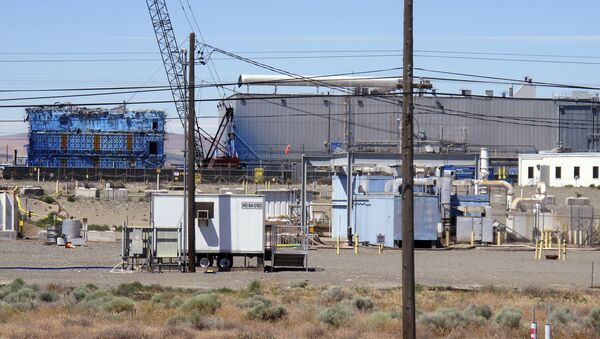 When workers at a more than half-century old US nuclear facility attempted to stabilize a tunnel by filling it with fresh grout on Friday, one of its walls began to break apart, causing a four-hour-long emergency at the facility.

Workers at the Hanford nuclear waste site in Washington state were told to "take cover" during an incident involving steam coming from a small building at the end of one of the facility's tunnels Friday.

According to a report by the Tri-City Herald, the alarm was raised early in the morning when a crew spotted steam coming from one end of the PUREX radioactive waste storage tunnel. Some 500 workers were told to immediately move to the nearest Take Cover facility.

‘Operational Emergency’ Announced at US’ Main Nuclear Weapons Plant
No airborne release of radioactive material was officially reported, but the workers were told to avoid eating or drinking for the duration of the emergency, which lasted four hours.

According to later examination, the source of the steam cloud was the curing process of the fresh, concrete-like grout inside the tunnel, which generates heat and moisture. A team of construction workers were filling the half-century old tunnel with grout to stabilize it, which led to a hole opening in the wall of a previously-sealed building.

When the building wall failed, the moist warm air from the tunnel met with the cold morning atmosphere, resulting in visible steam, the Herald explains.

Zambian Nuclear Reactor's Construction With Russia's Support to Begin in 2019
The construction team will have to examine the opening that appeared in the building — originally built in 1964, when the tunnel was constructed — before proceeding with further grout work. According to estimations, some 36,000 cubic yards of grout will be needed to prevent the failing tunnel from collapsing.

The emergency warning was lifted four hours following the incident.

The Hanford Nuclear Reservation is not far from the town of Richland, Washington. It was built in the mid-20th century and for decades produced plutonium for the US nuclear weapons arsenal. In 1988, production stopped, and the site became a burial ground for radioactive waste.