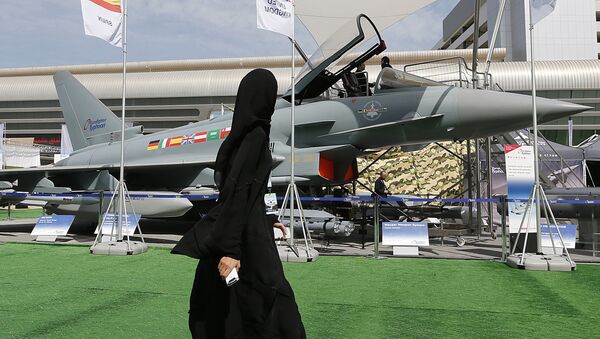 © AFP 2022 / KARIM SAHIB
Subscribe
German Chancellor Angela Merkel has declared that further arms exports to Saudi Arabia would be "impossible" amid continued uncertainty surrounding the murder of Saudi opposition journalist Jamal Khashoggi. Berlin has also urged other European powers to follow suit and halt their own weapons exports to the Kingdom.

Berlin is in the process of reviewing its arms sales to Saudi Arabia, which include over a dozen fast patrol boats built by Luerssen Defense, as well as COBRA anti-artillery radar systems built by a consortium including Airbus Defense & Space, Thales, and Lockheed Martin.

However, with German weapons systems accounting for less than 2 percent of the Kingdom's total weapons purchases, the real concern among German allies is that Berlin's Khashoggi stance may undermine more substantive defense orders which depend on German components.

Speaking to Reuters, industry sources said that the $12.99 billion Saudi order of 48 Eurofighter Typhoons, manufactured by a consortium including the UK's BAE Systems, the Franco-German-Spanish Airbus, and Italy's Leonardo may also be at risk, given that about one third of the 4.5 generation fighters' components are made in Germany.

Madrid to Keep Delivering Arms to Riyadh Amid Journo’s Murder – Prime Minister
The deal, agreed to in a memorandum of understanding in March after four years of negotiations, is yet to be finalized.

Brandenburg Institute for Society and Security director Tim Stuchtey said the divergence between Berlin on one side and other European weapons exporters on the other regarding sales to Riyadh was indicative of the problems associated with the lack of a European-wide system of rules on the issue. "As long as we don't have unified European rules for arms exports, we will always have this problem. It will be difficult to square French and British attitudes about arms exports with German moral imperatives," he said.

"For me, it would be important that we come to a joint European stance. Because if all European countries are in agreement, it will make an impression on the government in Riyadh. It will not have any positive consequences if we halt arms exports but other countries at the same time fill the gap," Altmaier said.

Turkish Police Receive Permission to Search Well at Saudi Consulate - Reports
On Tuesday, Jens Kestner, a member of the Bundestag's Defense Committee from the Alternative for Germany party, told Sputnik that Berlin must take other measures in addition to the arms sales halt, stressing that the Khashoggi case "seems to require a fundamental answer" and that Riyadh and all other powers in the Middle East must comply with internationally accepted norms of conduct and take them seriously.

Spain's prime minister said Wednesday that Madrid would not cancel arms deliveries to Saudi Arabia, citing Spaniards' "need to have the means to exist." Earlier, US President Donald Trump repeatedly indicated that he had no plans to jeopardize $110 billion in weapons contracts with the Kingdom over Khashoggi's death. French President Emmanuel Macron evaded questions about halting arms sales to Riyadh over the journalist's murder on Tuesday. Canada, meanwhile, has pointed to difficulties in scrapping its $12 billion arms deal with Saudi Arabia.

Jamal Khashoggi disappeared in Istanbul on October 2, and was last seen entering the Saudi consulate. Last week, Saudi officials admitted that the journalist had been killed in a fight inside the consulate. Authorities have arrested 18 individuals over the incident, with at least five officials including a senior aid to the crown prince sacked.