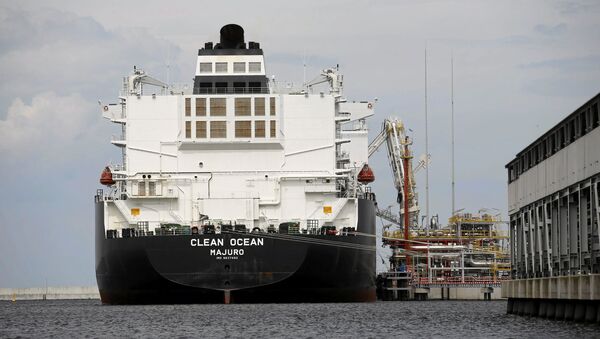 © REUTERS / Agencja Gazata/Cezary Aszkielowicz
Subscribe
The developments come amid the ongoing trade spat between Beijing and Washington. As of September 24, US President Donald Trump imposed additional tariffs on $200 billion in Chinese goods, while China retaliated with levies on $60 billion in American products, including a 10-percent tariff on US liquefied natural gas (LNG).

Beijing has put an end to its purchase of US liquefied natural gas (LNG), Reuters cited several sources as saying late last week.

In his opinion piece for Sputnik, political analyst Dmitry Lekukh pointed out that the move will deal a "very serious blow to the US energy sector given that last year the Americans supplied about 3.6 million tons of LNG to the Chinese markets."

Lekukh recalled that in the past year, US LNG manufacturers have earned about one billion dollars per month from LNG exports to China.

"Given the constant reduction of Chinese coal capacities and the growth of the country's gas needs, the US is now losing access to the most promising market in Southeast Asia," he noted, adding that China is expected to become the leader among gas importers by November of this year.

As for the US, it will most likely face the problem of overproduction of liquefied gas "in view of the forced 'political' withdrawal of American LNG from the thriving Chinese markets," according to Lekukh.

"For US energy structures, overproduction is very bad news in this case. Especially if you take into account the parallel capacity of the Russian Yamal region, compared to which American shale is not very competitive on Asian markets. Technically, Americans cannot be seen as Russia's competitors [in this field]. Moreover, they themselves are partly to buy Russian LNG," he added.

In this vein, Lekukh recalled that the US LNG manufacturers are also not very competitive as compared to "traditional suppliers from Qatar and other Gulf states which deliver the fuel to Southeast Asia."

It is safe to assume, therefore, that the European markets may become "the most suitable victim of the American shale expansion – something that will neither be prevented by Nord Stream nor Turkish Stream [gas pipeline projects]," he pointed out.

"Of course, no one doubts that both the Nord Stream and Turkish Stream pipelines will finally be built. But this does not mean at all that all of Europe will sit out on the consumption of cheap and high-quality Russian pipeline gas. After all, Russia's resource base is huge but far from unlimited," Lekukh emphasized.

Europe Uses US LNG Terminals as Backup for Pipeline Gas System - ENGIE
Therefore, he went on, Russia has started to think about the need for further "gas expansion" into the European markets amid reports about the planned consensus on limiting imports of Russian gas to Europe to the level of Nord Stream and Nord Stream 2, plus the "Turkish corridors" and "Soviet" routes.

"Given the fall in European [gas] production, this will be quite enough for American LNG to crawl into European markets. And such a situation on European routes will mean a sort of consensus among all relatively significant gas suppliers," Lekukh concluded.

000000
Popular comments
I for one am so glad.It is about time they were put in their place.
Aramis
15 October 2018, 19:00 GMT5
000000
For sure the US will manage to sell that LNG to polish and ukrainians. They buy all the crap coming from the Evil State.
jameskees
15 October 2018, 19:57 GMT3
000000
Newsfeed
0
New firstOld first
loader
LIVE
Заголовок открываемого материала
Access to the chat has been blocked for violating the rules . You will be able to participate again through:∞. If you do not agree with the blocking, please use the feedback form
The discussion is closed. You can participate in the discussion within 24 hours after the publication of the article.
To participate in the discussion
log in or register
loader
Chats
Заголовок открываемого материала
Worldwide
InternationalEnglishEnglishMundoEspañolSpanish
Europe
DeutschlandDeutschGermanFranceFrançaisFrenchΕλλάδαΕλληνικάGreekItaliaItalianoItalianČeská republikaČeštinaCzechPolskaPolskiPolishСрбиjаСрпскиSerbianLatvijaLatviešuLatvianLietuvaLietuviųLithuanianMoldovaMoldoveneascăMoldavianБеларусьБеларускiBelarusian
Transcaucasia
ԱրմենիաՀայերենArmenianАҧсныАҧсышәалаAbkhazХуссар ИрыстонИронауОssetianსაქართველოქართულიGeorgianAzərbaycanАzərbaycancaAzerbaijani
Middle East
Sputnik عربيArabicArabicTürkiyeTürkçeTurkishSputnik ایرانPersianPersianSputnik افغانستانDariDari
Central Asia
ҚазақстанҚазақ тіліKazakhКыргызстанКыргызчаKyrgyzOʻzbekistonЎзбекчаUzbekТоҷикистонТоҷикӣTajik
East & Southeast Asia
Việt NamTiếng ViệtVietnamese日本日本語Japanese俄罗斯卫星通讯社中文（简体）Chinese (simplified)俄罗斯卫星通讯社中文（繁体）Chinese (traditional)
South America
BrasilPortuguêsPortuguese
NewsfeedBreaking
11:15 GMTMassive Plume of Smoke Reportedly Spotted Rising From Major US Base in Iraq - Video
11:13 GMTFrance Hardens Visa Rules for Moroccans, Algerians, Tunisians
11:05 GMTMan Who Threw Egg at Macron Admitted to Psychiatric Hospital
10:44 GMTGeorgina Rodriguez Desperate to Be Cristiano Ronaldo's Wife, Waiting for Man Utd Star to Propose
10:27 GMTTrump Facing Possible Criminal Liability For ‘Sustained Assault’ on Georgia’s Electoral Vote Count
10:25 GMTMilley Preps for Congressional Grilling Over ‘Treasonous’ Phone Call to PLA Head Behind Trump’s Back
10:17 GMTMoscow Calls on NATO, EU to Urge Pristina to Withdraw Forces From Kosovo and Prevent Escalation
10:15 GMTEuropean Parliament President Says German Elections Testify to Stability of Europe
10:12 GMTKremlin Sees No Reason for Ukraine to Be Hysterical About Russian-Hungarian Gas Contract
10:01 GMTCampaign Ads Offering 'Russian Virgins & Cocaine' on a Menu Outrages Embassy in Spain
10:00 GMTUK's Labour Party Blames Government for Fuel Crisis
09:08 GMTFrench Sanofi Gives Up mRNA COVID-19 Vaccine Development Over Saturated Market
08:42 GMTUK to Start First Round of Talks on Joining Trans-Pacific Trade Bloc
08:40 GMTTwitter Frenzy as UEFA Scraps Decision to Fine European Clubs for Launching Super League
08:36 GMTHaiti Dismisses Highly-Criticized Electoral Council, Prime Minister’s Office Says
08:34 GMTBeijing on Exclusion From Dukovany NPP Project: We Hope Prague Will Respect Market Rules
08:30 GMTDemi Lovato Opens Up About 'Warm and Loving' UFO Interaction
08:27 GMTBudapest Summons Kiev's Ambassador to Discuss Reaction to Gas Deal With Russia, Reports Say
07:58 GMTYouTube Removes Content 'Casting Doubt Over Elections in US, Germany'
07:56 GMTPolice Chief in Utah Takes Leave of Absence Amid Gabby Petito 911 Call Handling Probe