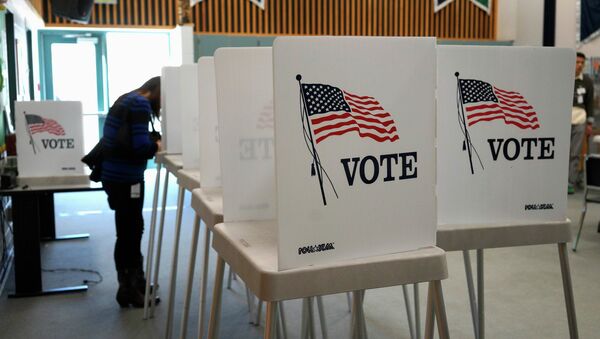 © REUTERS / Rick Wilking
Subscribe
International
India
Africa
MOSCOW (Sputnik) - The approval rating for US President Donald Trump, representing the Republican Party, has improved compared to August but the Democratic Party is leading its rival party by 11 percentage points, with just over three weeks left until the midterm election in the United States, a poll revealed on Sunday.

According to the results of the poll, conducted by Langer Research Associates, a total of 53 percent of the respondents said that they supported the Democratic Party, while 42 percent of the US citizens who took part in the poll said they would vote for the Republicans.

Google Can 'Shift Up to 12 Million Votes' in 2018 Midterm Elections
The poll revealed that 45 percent of the respondents trust the Democratic Party more when it comes to dealing with the key problems that the country faces and only 37 percent would like the Republican Party to handle these issues.

Trump's approval rating, in turn, has increased compared to August by five percentage points, from 36 percent to 41 percent, and is now his second highest since he took office. However, the poll said that his average approval rating is the lowest one for a US president after his first 20 months in the White House since the late 1940s.

The midterm election to the US Congress is scheduled to be held on November 6. The US voters will elect all 435 members of the House of Representatives and around a third of all US senators.

The poll was conducted for the ABC News broadcaster and The Washington Post newspaper among a total of 1,144 respondents over the phone between October 8-11.