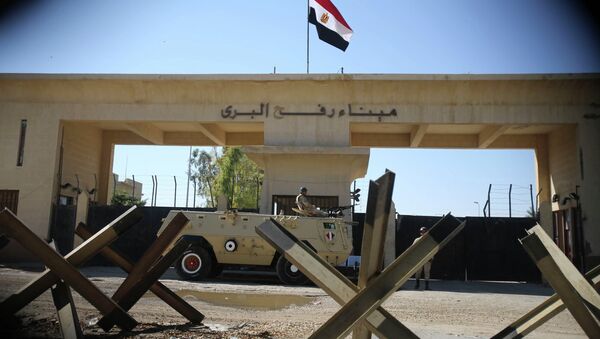 © REUTERS / Ibraheem Abu Mustafa/Files
Subscribe
International
India
Africa
RAMALLAH (Sputnik) - Egyptian intelligence chief Abbas Kamel will pay a visit to the Gaza Strip on Thursday where he will meet with the leadership of Hamas movement to discuss the Israeli-Palestinian reconciliation, a source told Sputnik.

"A delegation from the Egyptian intelligence service headed by intelligence chief Brigadier General Abbas Kamel will visit the Gaza Strip on Thursday to meet with the leadership of Hamas movement," the source said, adding that the sides will discuss the reconciliation agreement with the Israelis.

Gaza Strip to Get Fuel Deliveries Again Only if Unrest Stops - Defense Minister
The source noted that the delegation was also expected to visit Israel but did not specify the goals of the visit.

The long-standing tensions between Israel and Palestine have escalated in late March, when Palestinians launched protest rallies at the border of Gaza, controlled by Hamas since 2007. The border riots were accompanied with launching of arson balloons and burning kites with the aim reportedly to provoke fires in Israel.

Israeli Prime Minister Benjamin Netanyahu on Sunday threatened Hamas with "very powerful blows" if attacks from the Gaza Strip and violence on the border continue.

On Friday, at least seven Palestinian were killed in clashes with Israeli troops near the Gaza Strip border. The Israeli military said that the troops had opened fire on a group of the Palestinian militants, who approached an army post and detonated a bomb.

Egypt has been working together with the United Nations to ease tensions between the sides.