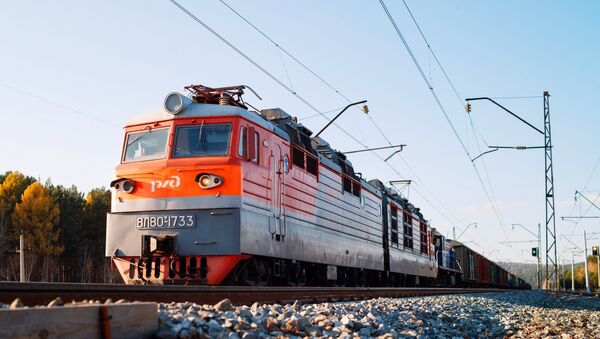 MOSCOW (Sputnik) - A high-level delegation from Libya will soon visit Russia to discuss projects for cooperation in the sphere of railway construction, Libyan Government of National Accord (GNA) Economy and Industry Minister Nasir Shaglan told Kommersant newspaper in an interview published on Sunday.

According to the minister, during his visit to Moscow earlier in September, he held "wonderful negotiations" with the leadership of the Russian Railways (RZD) company and discussed the project of construction of the railway connecting the Libyan cities of Benghazi and Sirte.

"A delegation consisting of high-ranking officials in charge of the railways in Libya will soon visit Moscow accompanied by engineers and financial experts. There will be a discussion about resumption of old arrangements. The delegation is ready to arrive as soon as Russia gives visas and sets a date for the visit. We really need good roads. Previously we focused on airports, but we do not have planes due to the war," Shaglan said.

Africa
Afreximbank: Ties with Russia Open Way to European, Central Asia Markets
Russian Railways first deputy CEO, Alexander Misharin, earlier told Sputnik that the company was considering the possibility of resuming the construction of the Sirte-Benghazi railway in Libya under the condition that Tripoli would have compensated the costs after the project was halted in 2011.

The company signed a deal with the government of late Libyan leader Muammar Gaddafi in 2008, but the project had to be put on hold after Gaddafi's government was toppled in a violent uprising in 2011. Russian personnel was evacuated from the conflict torn country, however significant material assets, including road machinery and equipment, remained there.

Libya has been torn apart by conflict since long-time leader Gaddafi was overthrown in 2011. The eastern part of the country is governed by the parliament, backed by the Libyan National Army (LNA) and located in Tobruk. The UN-backed GNA, headed by Prime Minister Fayez Sarraj, operates in the country's west and is headquartered in Tripoli.

The lack of the single central government and army resulted in the surge of trafficking activities and the development of militant groups and terror organizations in the country.