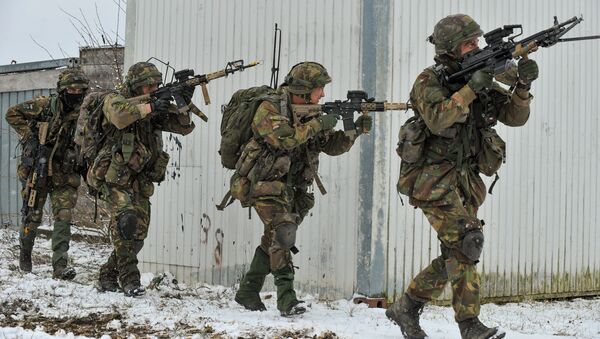 CC BY 2.0 / 7th Army Training Command / Dutch Army at Allied Spirit I
Subscribe
Dutch soldiers have received 1,000 euros each to buy warm clothes ahead of the upcoming NATO exercise in Norway, where two-digit subzero spells are not uncommon at this time of the year.

Despite Scandinavia commonly being associated with a harsh climate among central Europeans, the Dutch defense ministry failed to take the necessary precautions and procure warm clothes for its contingent's participation in the Trident Juncture 18 exercise, the biggest NATO drills in years, the newspaper De Telegraaf reported.

Instead of being provided warm clothes, the Dutch soldiers will have to go shopping themselves before heading north in a month.

Dutch Defense Minister Barbara Vesser attributed this wardrobe malfunction to a dramatic lack of time. Earlier, the Dutch soldiers had participated in drills in Lithuania, where no extra warm clothes were needed. The Dutch defense failed to take into account the upcoming drills in Norway, which left the Dutch military supplier with not enough time to provide the necessary clothes.

However, while the Dutch soldiers will have to do the shopping themselves, they won't have to pay from their own pocket, Vesser pledged. Each soldier will receive €1,000 to cover his or her expenses.

"The soldiers must have the clothes they need. And I do not want to experience this again," the Defense Minister said, as quoted by the newspaper Volkskrant. At the same time, she emphasized that there is no lack of uniforms. "This question is about underwear and not combat clothing," she stressed.

The NATO exercise Trident Juncture 18 will be held in central Norway in late October and early November, when the quicksilver falls well below zero in parts of Scandinavia. The exercise will bring together about 40,000 participants from all NATO member states, as well as Finland and Sweden, and is touted as the largest in years.

000000
Popular comments
It is a shame for the defense minister that the soldiers have no winter Clothes ... in case of War the dutch defense minister will ask for a later start because she has first to order Clothes !!!! also for her self :):) what a lousy organization !!!!