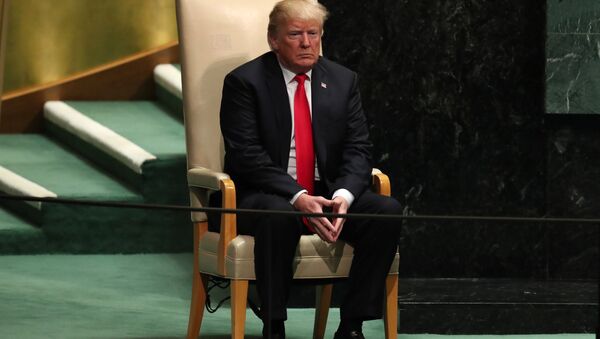 MOSCOW (Sputnik) - Laughter at US President Donald Trump’s claims of US achievements during his speech at the UN General Assembly is a sign of his country’s deepening isolation, the chief of Iran’s Revolutionary Guards Corps said on Wednesday, according to the Tasnim news agency.

Mohammad Ali Jafari called laughter heard during Trump’s address to the assembly "a major political scandal" that spelled "further isolation of the US."

The commander also slammed the US leader for his "cheap comments" on Iran’s alleged villainy, saying the United States and its Gulf allies were the ones destabilizing the Middle East.

US Unable to Maintain Anti-Tehran Sanctions in Long Term - Iranian President
In his speech at the general assembly on Tuesday, the US president praised the "extraordinary" work of the current White House administration, while some delegates laughed and muttered. He then accused Iran of sowing "chaos, death and destruction" in the Middle East.

According to the media reports, Turkish President Recep Tayyip Erdogan left the hall of the UN General Assembly while Trump was talking, however, later correspondent of the Turkish government newspaper Sabah Ragip Soilu stressed that Erdogan left in order to prepare his own speech, not to protest against the US statements.