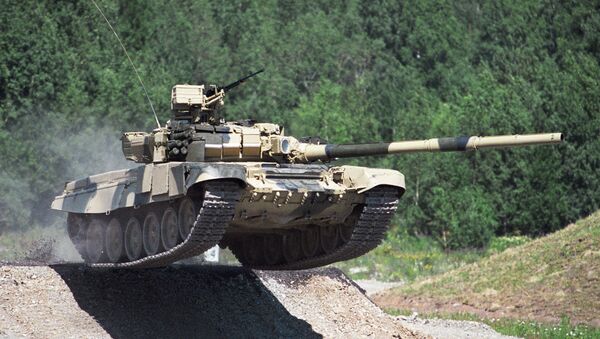 The apparatus will enable T-90 tank crews to conduct deep fording for at least 45 minutes. State-owned defense lab DRDO is expected to transfer the technology to the private sector for mass production, following which they will be made available to the army starting 2019.

New Delhi (Sputnik) — Crews of the Indian army's T-90 tank are set to equip themselves with major war-fighting apparatus used while crossing rivers or water canals in the rough Himalayan terrain. The equipment will make them capable to operate submerged tanks continuously for at least 45 minutes during deep fording.

"Developed by DRDO Lab DEBEL, the IUWBA is used by the crew of tanks as a safety gear and is required by the tank crew for emergency escape when negotiating water obstacles while deep fording," a statement issued by the Indian Defense Ministry reads.

Dead End for Spike-MR Deal: India Tests Man Portable Anti-Tank Guided Missile
During deep fording, in the eventuality of the tank stalling mid-crossing, there is no alternative for the crew but to flood the tank to escape from the fighting/driver compartments of the tank and reach the surface of the water as per the enunciated emergency escape procedure.

The Indian army has put forth an annual requirement of 2,000 units of underwater breathing equipment with effect from 2019-20, while in total it will purchase 6,628 units of such equipment. The state-owned defense lab DRDO is expected to transfer the technology to the private sector for mass production. Companies like Flash forge, Jyotech, Sure Safety (India) Pvt Ltd, Osho Corp Global Pvt Ltd, H&H Precision Pvt Ltd have positively responded to the proposal for mass production.

The IUWBA, which will be a separate apparatus, will weigh around 5 kg. The equipment will retain its efficiency when stored at temperature ranging from —5 degrees Celsius to 55 degrees Celsius.

The Indian Defense Ministry has also accorded approval for design and development of test equipment for guided weapons systems of the T-90 tank. At present, the equipment is imported from foreign firms.