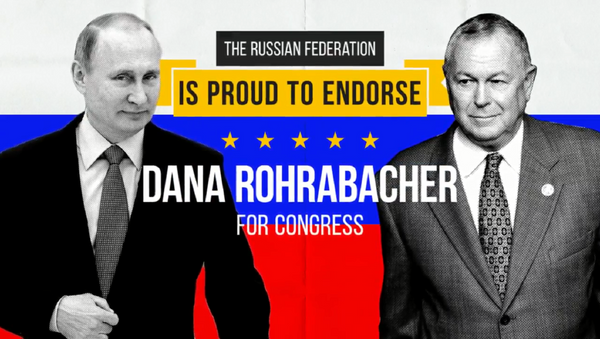 © Red to Blue / YouTube
Subscribe
The Democrats are - like their conservative counterparts - gearing up for the midterm elections with ad buys and message crafting. However, as the party begins its bid for a ‘blue wave’ across the US, it is alienating parts of its progressive base.

That's according to Richard Becker, author of "Palestine, Israel and the US Empire." Becker joined Radio Sputnik's By Any Means Necessary to discuss a Democratic Super PAC's upcoming xenophobic political advertisements aimed at a "reactionary" member of the House of Representatives.

On Tuesday, Sputnik News reported on Red to Blue's purchase of two television ads and two mailers for a reported but unspecified six-figure sum.

​One ad features a woman with a Russian accent announcing that its target, 30-year House of Representatives incumbent Dana Rohrabacher (R-CA), is proudly endorsed by the Russian Federation and is a "true Russian hero."

"The true absurdity of US politics now in regards to the two main parties: we have the Republicans pushing ahead with an agenda that is a horrific agenda, that is really designed to destroy, at a time when the climate is obviously deteriorating — as you can see from the latest storms — changing in ways that are very dangerous," Becker told By Any Means Necessary hosts Eugene Puryear and Sean Blackmon. "The Republicans are trying to get rid of more regulations every day. They're cutting all the social programs, and they want to cut them even more. They want to eliminate them altogether; really, that's their dream. And defending racist, sexist, homophobic policies."

Becker highlighted the risk of confrontation between the United States and Russia, a confrontation which the Democrats seem to be angling for. "You hear the Democrats, on the other hand, [they] are attacking Republicans for being too friendly to Russia. Russia and the United States obviously are the two leading nuclear weapons powers in the world, and they're in close proximity to each other, like say in Syria right now, which could lead to — and I'm not predicting it — but it could lead to a confrontation that could rise to a global confrontation between nuclear weapons powers."

"Rohrabacher is a thorough-going reactionary, particularly on all domestic issues. He's certainly a friend, a promoter of the military industrial complex. Prop 187, back in in 1994… tried to criminalize immigrants and to say that immigrant children didn't have the right to go to school if the parents were undocumented, immigrants didn't have a right to access healthcare and so forth," Becker noted. Rohrabacher was "for that." He was also supportive of Proposition 209, Becker added, which tried to outlaw affirmative action.

"He's got this whole awful record, and yet the Democrats are now gonna attack him and go after his House seat on the basis of wanting to have better relations between the US and Russia," the author told By Any Means Necessary.

In advocating for such a confrontation, in which it would be the working class, not the Democratic elite, who would suffer the most, the "so-called party of the people" reveals itself.

"Why do we have the Democrats making their main thrust of their rhetoric against the Republicans be about being soft on Russia when there's all the rest of this?" Becker said, referring to the anti-worker, anti-LGBTQ and anti-immigrant rhetoric of Rohrabacher and fellow Republicans. "I think the answer to that question is, to address those issues, to address the real issues, means to address the system itself."

Becker noted that despite whatever US President Donald Trump and Rohrabacher say, the US' enemy number one is so-called "great power competition" from Russia and China. That's according to the US Department of Defense's 2018 National Security Strategy. "It once again comes back to seeking to be the single superpower in the world," Becker said.

​"Apparently their focus groups tell them that all the propaganda has persuaded a good part of the population that Russia is the problem, when in fact it's just a ridiculous assertion in the context of this election," Becker said.

"If the Democrats are gonna win the House, and I don't think they'll win the Senate, they're coming in, they're resurging, but they're resurging on the basis of calling for an even more hostile, militaristic policy," he commented.

000000
Popular comments
1000 US citizens are killed every year by US police....ZERO US citizens have ever been killed by Russia in all of history.... In fact thousands of US citizens are killed by US citizens every year by guns car accidents stabbing bombing poison in malls schools theaters churches concert and their own have homes.....again ...ZERO ZERO ZERO US citizens have ever been killed by Russia in all of history..... In fact Soviet Russia was a US ally against the Nazis saving half the world from fascism....... So USA you are your own worst enemy you USA are killing yourselves and are a serious danger to yourselves and the rest of humanity....so point your nukes at yourselves USA you are your own worst enemy
Tazo
18 September 2018, 01:32 GMT
000000
neither side is worth the time to read about
michael
18 September 2018, 09:46 GMT
000000
Newsfeed
0
New firstOld first
loader
LIVE
Заголовок открываемого материала
Access to the chat has been blocked for violating the rules . You will be able to participate again through:∞. If you do not agree with the blocking, please use the feedback form
The discussion is closed. You can participate in the discussion within 24 hours after the publication of the article.
To participate in the discussion
log in or register
loader
Chats
Заголовок открываемого материала
Worldwide
InternationalEnglishEnglishMundoEspañolSpanish
Europe
DeutschlandDeutschGermanFranceFrançaisFrenchΕλλάδαΕλληνικάGreekItaliaItalianoItalianČeská republikaČeštinaCzechPolskaPolskiPolishСрбиjаСрпскиSerbianLatvijaLatviešuLatvianLietuvaLietuviųLithuanianMoldovaMoldoveneascăMoldavianБеларусьБеларускiBelarusian
Transcaucasia
ԱրմենիաՀայերենArmenianАҧсныАҧсышәалаAbkhazХуссар ИрыстонИронауОssetianსაქართველოქართულიGeorgianAzərbaycanАzərbaycancaAzerbaijani
Middle East
Sputnik عربيArabicArabicTürkiyeTürkçeTurkishSputnik ایرانPersianPersianSputnik افغانستانDariDari
Central Asia
ҚазақстанҚазақ тіліKazakhКыргызстанКыргызчаKyrgyzOʻzbekistonЎзбекчаUzbekТоҷикистонТоҷикӣTajik
East & Southeast Asia
Việt NamTiếng ViệtVietnamese日本日本語Japanese俄罗斯卫星通讯社中文（简体）Chinese (simplified)俄罗斯卫星通讯社中文（繁体）Chinese (traditional)
South America
BrasilPortuguêsPortuguese
NewsfeedBreaking
01:22 GMTClimate Change-Driven Cyclones Could be Regular Sights in Europe in 30-50 Years, Meteorologist Warns
01:02 GMT‘License to Murder Children?’ Psaki Panned for Bringing Up Biden’s Losses in Kabul Strike Answer
00:38 GMTMilley Told Admiral to Halt Operations in Pacific That China Could Deem 'Provocative', Authors Claim
00:11 GMTPremier League Goals of the Weekend
YesterdayMali Looks for ‘Plan B’ to ‘Bolster Our National Defense’ As French Mission Exits, Leaving Chaos
YesterdayGlobal Pandemic Caused Significant Surge in Demand For Black Bridal Dressers, Fashion Experts Say
YesterdayCoronavirus Death Toll Surpasses 1918 Influenza to Become Deadliest Pandemic in US History
YesterdayIran's New Defense Minister Says Enemies Will Get 'Crushing Response' - Report
YesterdayBorrell Expresses Regrets That EU Countries Were Not Invited to Join AUKUS
Yesterday‘Go Back to Mexico’: Shocking Video of US Border Patrol on Horseback Seen Whipping Haitian Refugees
YesterdayCDC Recommends Admitting Afghan Refugees 21 Days After Measles Vaccine, Reports Say
Yesterday26 GOP Governors Demand Meeting With Biden Amid Deepening Frustration Over Border Crisis
YesterdayDiscovery of Bats With Close Sars-CoV-2 Relative Add More Evidence to Natural Origins of COVID-19
YesterdayFull Harvest Moon Lights Up Sky Over Buenos Aires
Yesterday‘I Got Chills’: Travel Blogger Finds Video of Gaby Petito’s Van
YesterdayTexas Governor Asks Biden to Declare Federal Emergency in Response to Border Crisis
YesterdayUS House to Pass Bill to Fund Gov't. Until 2022, Suspend Debt Limit Until 2023
YesterdayTaliban Appoint New Leaders of Two Provinces in Eastern Afghanistan After Deadly Attacks
YesterdayIran's Nuclear Chief Urges IAEA to Avoid Politicization
YesterdayGlobal Stock Markets Plunge as Chinese Giant Evergrande Faces Mountain of Debt