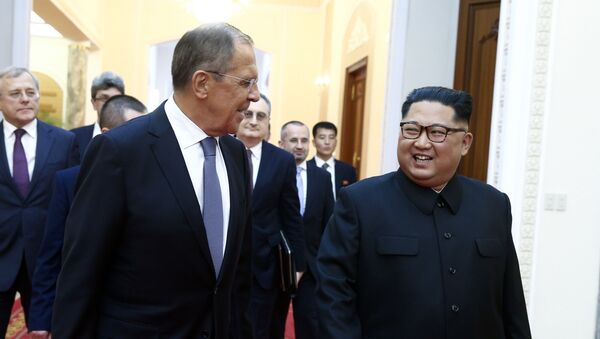 © Sputnik / Valeriy Sharifulin
/
Go to the mediabank
Subscribe
International
India
Africa
WASHINGTON (Sputnik) – Russia is working actively to undermine US sanctions against North Korea, US Secretary of State Mike Pompeo said in a press conference on Friday, echoing accusations lodged a day earlier by US Ambassador to the UN Nikki Haley.

“I spoke with Ambassador Haley about this earlier today, Russia has actively attempted to undermine the UN Security Council resolutions, the work of the 1718 Committee, the committee of the UN that evaluates compliance with sanctions by attempting to change the language there," Pompeo told reporters.

Asia
Russia Waives Objections to UN Report on North Korea
Pompeo was referring to the UN Security Council Sanctions Committee on North Korea, a panel of experts created under UNSC Resolution 1718. Pompeo said he hoped the panel would remain independent and report on the facts and not allow a single country such as Russia to draft language.

The top US diplomat said the committee should publish the unmodified document just as the originally intended to highlight the clear activities related to sanctions violations.

He added that the United States was as committed as ever to enforcing UN sanctions in order to achieve full, verifiable denuclearization on the Korean peninsula.

Haley on Thursday accused Russia of interfering in a UN report on the implementation of North Korea sanctions by pressuring the experts on the panel to make changes.

Asia
North Korea Reportedly Concealing Further Nuclearization from US Intelligence
On August 30, Russian Ambassador to the UN Vassily Nebenzia said Russia has held up the publication of a report on North Korea by the 1718 committee because of disagreements over certain elements of the report, including the conduit of the business itself.

He said he could not divulge details of the confidential draft compiled by the UN Security Council’s 1718 Sanctions Committee but said member states were concerned about repeated internet leaks.

The United Nations has introduced multiple sanctions against North Korea in response to its repeated ICBM launches and nuclear tests. The world body, in particular, has restricted oil exports to Pyongyang, banned imports of textile products from North Korea as well as the country's access to gas liquids.