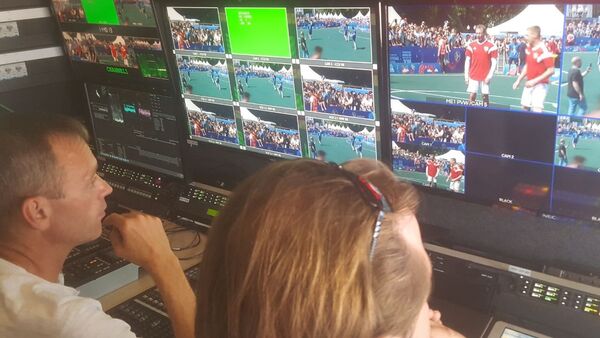 © Photo : Ruptly
Subscribe
The subscription plan enables access to thousands of videos from over 100 countries, provided by an extensive network of journalists employed by the video news agency.

Global video news agency Ruptly has unveiled a new feature called Ruptly PASS that will essentially make all content on its Ruptly.tv platform available to users via a new low-cost subscription model.

The new subscription model, developed to democratize the video news industry and support emerging and mid-sized digital publishers, enables access to some 80,000 branded videos for just 12.50 euros per month and gives users unlimited access to video and live events on the service.

"Ruptly PASS brings the greatest value to subscribers on the market today. We have innovated and changed the way we provide video content to support the growth of emerging and mid-sized digital publishers," the video news agency’s CEO, Dinara Toktosunova, said. "By making our content more accessible, we’ve delivered an unprecedented market-breaking subscription model of only 12.50 euros per month; providing access to high-quality video without the high cost. We hope this will inspire talented publishers to strengthen their production, experiment with new video formats, and of course grow their audiences."

RT Ruptly Producer Attacked in London During Protest Over Grenfell Tower Fire
Ruptly publishes an average of 40 new video stories daily, supplied by a 3,000-strong network of video journalists from over 100 countries. In addition to video-on-demand, around five live events are streamed each day via the live.ruptly.tv platform.

The Ruptly PASS subscription will also provide access to a collection of award-winning 360-degree videos.

"Our journalists are delivering stories that resonate with audiences around the world. We take state-of-the-art technology and make it user-friendly. By pioneering multi-feed live video streaming to client social media pages, we have simplified live delivery to a few clicks. We made panoramic video accessible via download, enabling dozens of media organizations to try out the format for the first time. All the while we continue reducing the need for specialist technical facilities on the subscriber side," she added.

Ruptly’s pioneering work was recently recognized by The Drum Online Media Awards for “Best B2B News Site” in 2017, “Commercial Team of the Year” in 2018, and Ruptly LIVE was a finalist of both The Drum Online Media Awards and the Global Media Innovator competition organized by the UN Diplomatic Council.
Since its launch five years ago, the digital video news agency has pioneered new technologies, delivery platforms and content.

Ruptly’s achievements include being the first to deploy a drone over a war zone, delivering real-time drone videos and leading the market with the launch of a live platform that permits subscribers to up-pick  as many as nine events at once and stream videos to various destinations, including 360-degree live coverage directly to social media platforms.