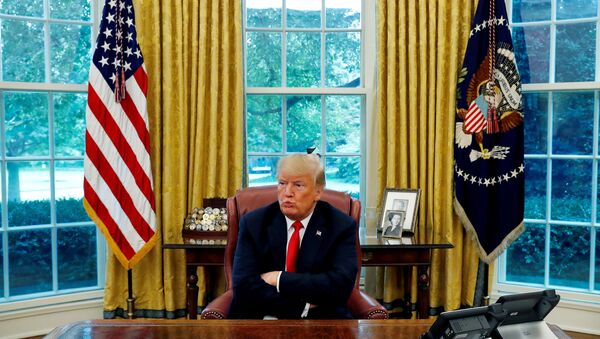 © REUTERS / Leah Millis
Subscribe
International
India
Africa
WASHINGTON (Sputnik) - A majority of Americans think Congress should act more like a check on the powers of US President Donald Trump, but they do not think the legislature needs to start impeachment proceedings at this time, a new Quinnipiac University Poll revealed on Wednesday.

"Congress should be more of a check on President Donald Trump, voters say 58-27 percent," the poll said.  "But voters say 56-36 percent they would not like to see Congress begin impeachment proceedings against President Trump."

The same poll found that most Americans, or 54 percent, trust the news media to tell the truth more than Trump, compared to 30 percent who do not.

The poll surveyed 1,038 voters nationwide and had a margin of error of 3.7 percentage points.

Trump's Impeachment Would Cause Eruption in Markets – Economist
In late August, a Washington Post-ABC News revealed the findings of their poll indicating that a slight majority of voters — 49 percent compared to 46 percent — believed that the US Congress should initiate impeachment proceedings that would eventually lead to Trump's removal from office.

However, a day prior to the publication of the poll's findings, the Axios/SurveyMonkey released its poll that surveyed 4,362 adults based in the US with the later revealing that the prevailing part of Americans was not prepared for Congress to launch impeachment proceedings against Trump.