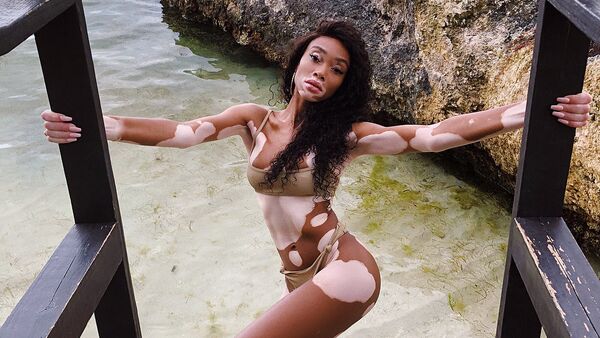 © Photo : winnieharlow/instagram
Subscribe
The 24-year-old Canadian sensation, who started her career as a contestant on America’s Next Top Model in 2014, was presented ”Breakthrough Model of the Year” by Nicki Minaj at Daily Front Row’s 2018 Fashion & Media Awards on Thursday night.

It’s official: Winnie Harlow has earned her Victoria’s Secret wings and got really emotional upon finding out the exciting news – the video of the exact moment the model learnt about the confirmation went viral in an instant.

According to Just Jared, the 24-year-old model was spotted at the IMG VIP Lounge by Principessa Prosecco, where she announced that she had been chosen to be a Victoria’s Secret Angel.

Even though Harlow didn’t confirm her career breakthrough on social media, she has retweeted multiple well wishes from her fans, as well as the viral video.

@winnieharlow is a legend. You inspire me to keep going. You did it!!! Walking in VS is such a huge accomplishment I can only imagine the happiness and joy you are feeling.

Winnie, who rose to fame after starring in America’s Next Top Model, has been letting the whole world know she is not defined by vitiligo, a condition in which the skin loses its pigment and color in blotches. She has on numerous occasions emphasized that she is neither a “vitiligo sufferer” nor a “vitiligo model,” making references to tabloid and magazine headlines pointing out her disease.

@eveningstandardmagazine @evening.standard and all other tabloids, magazines and people who write articles on me PSA: I’m not a “Vitiligo Sufferer”. I’m not a “Vitiligo model”. I am Winnie. I am a model. And i happen to have Vitiligo. Stop putting these titles on me or anyone else. I AM NOT SUFFERING! If anything I’m SUCCEEDING at showing people that their differences don’t make them WHO they are! All our differences are apart of who we are but they don’t define us! I’m sick of every headline ending in “Vitiligo Sufferer” or “Suffers from Vitiligo”. Do you see me suffering? The only thing I’m Suffering from are your headlines and the closed minds of humans who have one beauty standard locked into their minds when there are multiple standards of beauty! The beach was damn fine that day, nothing to suffer about! 🙄👉🏽

At last year’s British GQ awards, the UK’s ODEntertainment asked the model if she wanted to rock the catwalk for the lingerie brand, and she replied:

“Oh my gosh, I would love that. You know what? That’s the goal for next year. I’m putting it [out] in the world, I’m going to work hard and aim for VS. I think I just need to get in the gym, strut myself, practice my walk and I’ll make it.”

Wow.. i can’t believe you did this. @NickiMinaj you came all the way to NYC to present me with BreakThrough Model of the Year award at @DailyFrontRow. The accomplishment in itself is breath taking to me! But to have someone I’ve looked up to for Soooo long and now call my friend present this iconic award to me.. I’m crying right now writing this. You know i love you. ❤️❤️

The Victoria’s Secret Fashion Show is reportedly scheduled to take place in November.