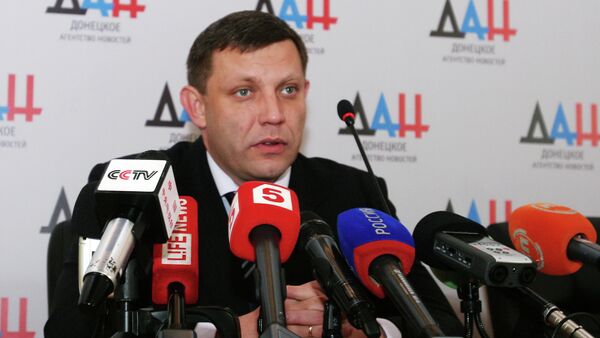 SIMFEROPOL (Sputnik) - German lawmaker Andreas Maurer, the chairman of the Left Party's faction in the parliament of the Lower Saxony's town of Quakenbruck, told Sputnik that Facebook had blocked his account after he had published a photo with Alexander Zakharchenko, the former head of the self-proclaimed Donetsk People's Republic (DPR).

"I was blocked for 24 hours because I have published a photo, made in Donetsk, capturing the moment when Alexander Zakharchenko was awarding me with the order of friendship. Facebook appealed to the fact that this was allegedly a photo of a terrorist organization," Maurer told Sputnik.

He pointed out that he had to write a letter to the Facebook administration, demanding an explanation.

"I explained to them that the photo captured not a terrorist organization, but the president of the Donetsk People's Republic, who used to be a friend of mine. After that, I was unblocked," Maurer said.

He emphasized that he had published the photo in order to commemorate Zakharchenko.

Zakharchenko's Murder Organized by Ukraine's Special Operations Forces - Adviser
Zakharchenko was killed in a blast at a cafe in central Donetsk on August 31. The blast left his bodyguard dead and 11 other people injured, including the DPR's finance minister and deputy prime minister, Alexander Timofeev.

According to the acting leader of the DPR, Dmitry Trapeznikov, several persons who have been detained on suspicion of being involved in the assassination, qualified the case as the sabotage of the Ukrainian authorities, which Kiev denied.

The DPR and the Lugansk People's Republic have proclaimed independence in 2014 over their refusal to recognize the new government that had come to power in what they qualified as a coup. Since then, Kiev has been in a state of an armed conflict with the breakaway republics.