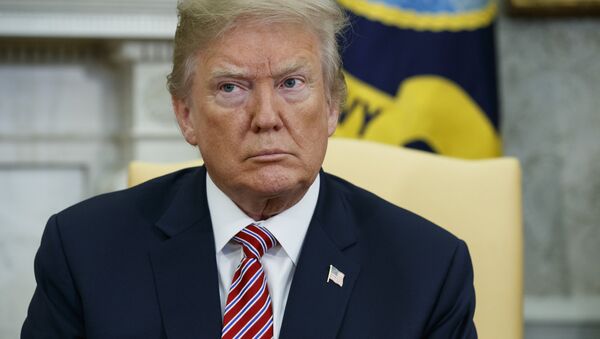 The New York Times on Wednesday took the unusual step of publishing an opinion piece by an anonymous senior official of the Trump administration, in violation of the paper’s own editorial policies.

The author claimed that a cabal of officials working in the White House of US President Donald Trump is trying to depose the president "one way or another."

Commentators and journalists ranging from staunch Trump supporters to CNN reporters have likened the revelation to that of a coup.

​But while there's long been talk of such a mutiny within the government, it has so far mostly stemmed from the intelligence community, which has used Russia as a pretext to bring down many of the people who worked with the president as he kicked off his political career. This time, the author argues that he and his cohorts aren't part of the "deep state," but instead members of the "steady state."

Award-winning editorial cartoonist Ted Rall told Radio Sputnik's Loud & Clear that he agrees. "I don't think we can call it a deep state kind of attempted coup, because the deep state traditionally refers to sort-of long term, non-political appointees — people who survive from one administration to the next — and this sounds like a political appointee of the Trump administration," he said.

The New York Times Platforms a Revolution of Indignity

While few are all that surprised by the revelations made in the piece, namely that Trump isn't all that popular among his staff, and that many consider him "unhinged," the political motivations of the author and his supposed comrades have raised more than a few eyebrows.

Lauria pointed out that the author of the op-ed condemned Trump's cozying up to so-called "autocrats" like North Korean leader Kim Jong Un and Russian President Vladimir Putin, two issues where the president has deviated from conservative orthodoxy by embracing diplomacy and negotiation while putting warmongering and xenophobia on the sidelines. Meanwhile, the author praised Trump's successes in deregulating the economy.

"I want to first of all dismiss the sickening nature, the nauseating nature about putting the country first and ‘we're all Americans' and rising above politics," Lauria said of the opinion piece writer. "This is an extremely political hit job on the president by someone inside his administration, so to give us all this patriotic stuff is something I found stomach churning."

Rall said that the article's author may be trying to save face and come out of the turmoil appearing as the "Edward Snowden" of the Trump White House.

Trump, for his part, has fiercely denounced the editorial in a series of public statements and tweets. In the immediate aftermath of the op-ed's publishing, the president said the New York Times was failing and dependent on him for views. Then, he wondered whether the source had committed an act of treason. After that, he pondered whether the author was "another phony source," adding that if not, the New York Times "must, for National Security purposes, turn him/her over to government."

The following day, Trump blamed "the Deep State and the Left, and their vehicle, the Fake News Media." Later, he called on the New York Times to "investigate themselves." White House spokeswoman Sarah Huckabee Sanders admonished journalists who asked for comment on who the author was, telling them to ask the paper's opinion desk and tweeting out a phone number through which to do so.