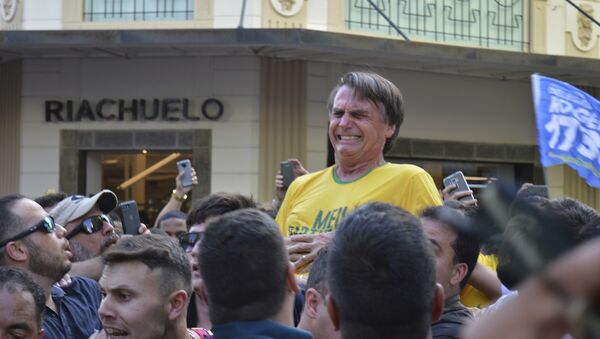 Right-wing Brazilian presidential candidate Jair Bolsonaro was stabbed in the abdomen during a parade in the city of Juiz de Fora Thursday. Surgeons told the press that he had suffered a deep stab wound that endangered his life, but that they had "successfully" performed an operation on him after the attack, according to Bolsonaro's running mate.

Doctors at the Santa Casa de Misericórdia hospital in Juiz de Fora told the press late Thursday that Bolsonaro was recuperating following a two-hour surgery. They said he suffered lacerations of the intestines and abdominal blood vein; that when he arrived his life was in danger.

Hospital officials could not say how long he would stay in the hospital, only that it would depend on how Bolsonaro reacts to surgery and that he will further be treated by doctors traveling from an elite Sao Paulo hospital. They said it could take him two months to fully recover.

A journalist at the parade, only feet in front of Bolsonaro, captured the attack on video.

Bolsonaro, who was caught by supporters as he fell, was quickly whisked away in an SUV, further video evidence indicated. His son later said on Twitter that the wound was superficial and his father was doing fine, but doctors later indicated his wounds were serious and required extensive surgery.

Shortly after the incident, Brazilian police announced that they'd arrested the man believed to have stabbed the candidate.

A recent poll by the Brazilian Institute of Public Opinion and Statistics (IBOPE) showed Bolsonaro in a very narrow lead over other candidates in next month's election, but predicted he would lose in a subsequent runoff election, Reuters reported. It was the first released since former president and Workers Party candidate Luiz Inacio Lula da Silva was ruled ineligible by a judge, enabling Bolsonaro to collect 22 percent of the vote.

Bolsonaro's doctors said that his injuries may place his campaign in jeopardy.