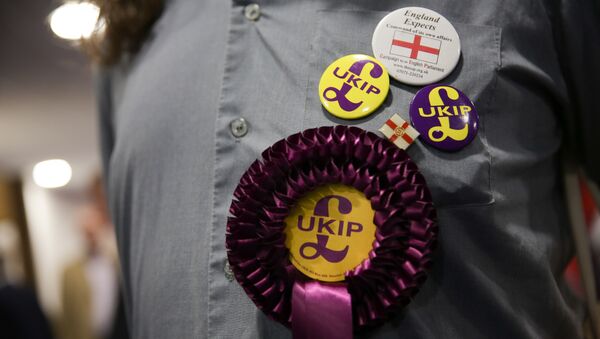 © AFP 2023 / Daniel Leal-Olivas
Subscribe
International
India
Africa
MOSCOW (Sputnik) – The UK Independence Party (UKIP) leader Gerard Batten said in a statement on Tuesday that the UK servicemen in Bosnia were forced to wear the EU flag on their uniform for the first time.

"No one should now join the British Army until we have left the EU and this has all been reversed … Our soldiers are no longer fighting for Queen and Country but under a foreign military command," Batten said in a UKIP statement.

The party also noted that the video showing the UK servicemen in Bosnia wearing the EU flag on their uniform has recently been circulating in the media.

He added that only after Brexit would the UK military be able to serve the interests of the nation.

"The sooner we are out of the EU, the sooner we will be able to rebuild our military into a force which serves the interests of our nation first and foremost. Meanwhile, British men and women should vote with their feet and not join the armed forces," Batten added.

Nigel Farage Warns He’ll Return As UKIP Leader If Brexit Betrayal Isn't Reversed
On June 23, 2016, the United Kingdom voted in a referendum to leave the European Union. Last March, UK Prime Minister Theresa May officially invoked Article 50 of the Lisbon Treaty, launching the process of the country's withdrawal from the bloc. The Brexit negotiations between London and the European Union started last year and are due to be completed by the end of March 2019.
Newsfeed
0
Access to the chat has been blocked for violating the rules . You will be able to participate again through:∞. If you do not agree with the blocking, please use the feedback form
The discussion is closed. You can participate in the discussion within 24 hours after the publication of the article.
To participate in the discussion
log in or register
loader
Chats
Заголовок открываемого материала