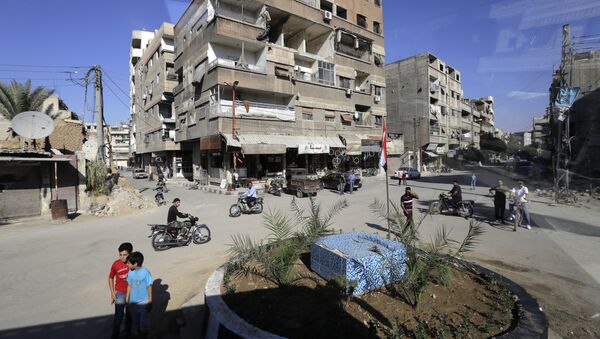 Last week, Syria's Foreign Minister Walid Muallem underscored that "anything that is actively promoted by the US" will not stop the Syrian Army's drive to clear Idlib Province and finally put an end to terrorism in this Arab country.

US Republican State Senator Richard Black from the Virginia legislature has lashed out at Washington's "political approach," which he claimed had not brought any benefits to Americans and caused chaos in the Middle East, riding roughshod over Libya, Iraq, Afghanistan and Yemen, according to SANA, Syria's state-run news agency.

Speaking to reporters after his talks with Syria's political and media advisor Bouthaina Shaaban, Black also urged the White House to cooperate with Damascus in order to help liberate the province of Idlib from Al Nusra Front* militants, which he recalled are part of al-Qaeda**.

He singled out the militants' plot to stage a chemical weapons attack in Idlib and hold the Syrian government responsible in order to stage a missile attack on Syria.

Black accused Western intelligence agencies of training and funding terrorists, who he said equally target both Syria and the rest of the world.

He suggested that some members of the US administration are poised to add to prolonging the war in Syria, a stance that Black said should be replaced with focusing on peaceful means to resolve the situation.

Black's remarks came after Syrian Foreign Minister Walid Muallem underlined that "anything that is actively promoted by the US will not affect the determination of the Syrian people and Syrian Army's plans to clear Idlib and finally put an end to terrorism in Syria."

He pointed out that the US presence in Syria is illegal and Washington can in no way justify it.

"The US presence has claimed the lives of thousands of Syrians and every time terrorists were besieged by the Syrian Arab Army, Washington provided them with protection. It became clear that Washington's main objective was to prolong the crisis in Syria in the interests of Israel," Muallem stressed.

The goal is to sharply destabilize the situation in the war-torn country and use a video of the "chemical attack" so that the provocation can be used as a pretext for massive strikes on Syria.

Earlier, USS The Sullivans, a destroyer with 56 cruise missiles on board arrived in the Persian Gulf, while a US В-1В bomber carrying 24 air-to-surface AGM-158 JASSM cruise missiles was deployed at Al Udeid air base in Qatar.

'Not the Reality:' Ex-Pink Floyd Frontman Has His Say on White Helmets' Mission
In April 2018, the US, France and the UK conducted a series of coordinated airstrikes against several targets in Syria that allegedly stored chemical weapons.

Damascus vehemently denied the accusations, blaming the al-Nusra Front for previously staging a chemical attack in the Syrian city of Douma to encourage foreign airstrikes against Syria.

While the White Helmets group touts itself as a Syrian humanitarian organization that allegedly saved tens of thousands of lives, Moscow and Damascus insist that the organization had ties to terrorists and extremists.