US Pressures EU for Quick Progress on Trade Deal 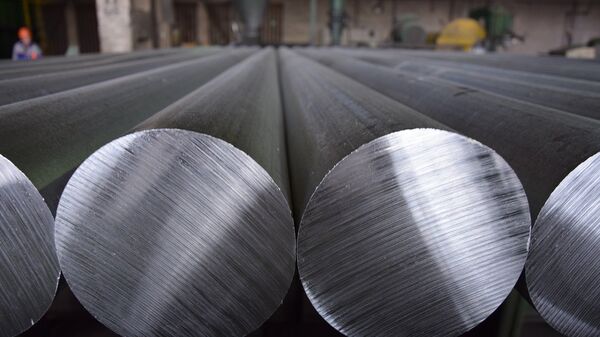 US officials are urging their European counterparts to advance the talks on a bilateral trade deal in order to resolve lingering disagreements on industrial metals, cars, and agricultural products. However, some Europeans remain skeptical about the potential of such talks.

Kristian Rouz — White House officials say US President Donald Trump is urging his European counterparts to advance talks on a bilateral trade accord. The deal would alleviate global trade tensions and facilitate the trans-Atlantic exchange in goods and services.

However, skeptics warn, a trade agreement between the US and EU could leave third-party countries at a disadvantage, contributing to the already heightened turbulence across the emerging markets.

German ambassador to the US Emily Haber said the EU had formed a working panel to develop a roadmap toward a trade deal with the US. The initiative comes after last month's meeting between Trump and the European Commission (EC) President Jean-Claude Junker.

"The Americans are in fact pressing for very rapid results," Haber said.

American Consumers Likely to Lose Out From US-Mexico Trade Deal - Analysts
The group first assembled this week to consider the first practical steps towards a bilateral agreement. The panel's mandate is to identify areas of mutual trade interest and prepare preliminary proposals for lowering or abolishing the existing trade barriers.

Haber said EU officials require political will and approvals from both Brussels and the majority of European nations to advance their work beyond the commenced consultations. She stressed that the deal needs to be reached before the European elections in May 2019.

"As far as the timelines go, I would point out that we have European Parliament elections next year, and an agreement would have to be reached in a timely manner before these elections," the German ambassador noted.

Alaska Business Worried About US-China Trade War - World Trade Center Alaska
For their part, Trump administration officials confirmed they seek fast-paced negotiations with the EU in the face of the looming elections to Congress this autumn.

Trump and Juncker previously agreed upon a hypothetical trade framework which would include industrial metals and cars, along with other products. The deal would also prevent a possible escalation in bilateral trade tension, as Trump had threatened to impose stringent tariffs on EU imports unless a mutually-beneficial agreement is achieved.

US Treasury Secretary Steven Mnuchin said last month he hoped the issued in trans-Atlantic trade could be resolved ‘very quickly'.

Meanwhile, German industry groups have expressed their interest in the talks, saying, however, that they are still uncertain of the framework and implementation of the possible accord.

"We know the Trump administration is strongly pressing for short timelines and quicker progress," Stefan Mair of the German industry group BDI said. "But we insist that this should not happen at the expense of a thorough result because we are interested in seeing an agreement that goes beyond tariffs and looks at more general issues affecting business relationships."

While the US and EU are discussing trade, the UK appears to be left out, as Albion can't negotiate trade deals outside of the EU until March 2019. However, if the US-EU agreement is reached before the EU elections, Britain — by then outside of the bloc — would have to start free trade talks with the US from scratch.

China Calls Trade Talks With US ‘Constructive’
This could be to the disadvantage of the UK, as goods and services from the continent would be more competitive in the US market, winning their market niche while the UK is still in the process of negotiations.
Additionally, some experts have suggested a deal with the US could encourage EU companies to seek lucrative opportunities in America while reducing their exposure to other markets.

Subsequently, the volumes of EU trade with entire regions — such as Africa or the Middle East — could decrease, further restraining the already-scarce influx of hard currencies into some regional economies.

This could add to the currency crises across emerging markets, such as Turkey, South Africa, and Argentina — albeit the latter might enjoy preferential trade with the EU in agricultural goods in the light of a recent EU-Mercosur Association accord.

Most recently, Trump and German Chancellor Angela Merkel discussed the possible trade deal — along with security issues such as Ukraine and Syria — over the phone.

The two leaders "strongly supported ongoing discussions between Washington and Brussels to remove barriers to a deeper trading relationship," the White House said in a statement following the talks.