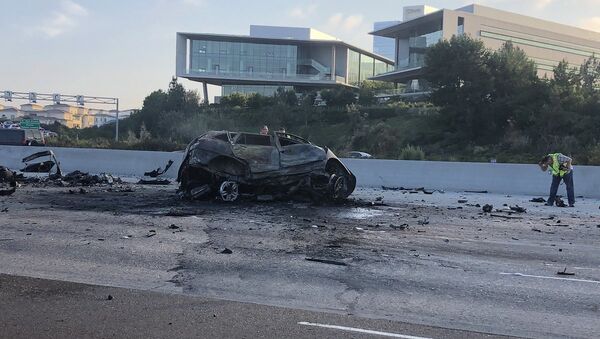 YouTube personality McSkillet, whose real name was Trevor Heitmann, killed a mother and daughter as well as himself on Thursday evening while driving a McLaren supercar at approximately 160 km/h the wrong way on a highway in southern California.

Fox News claimed that Heitmann, 18, was driving a 2014 McLaren sports car at speeds of over 160 km/h before crashing into a Hyundai SUV occupied by Aileen Pizarro, 43, and her 12-year-old daughter, Aryana, near San Diego. Heitmann's supercar was speeding southbound in a northbound lane, and involved at least eight other vehicles in the tragedy.

Heitmann and the McLaren were involved in an earlier incident, driving into an elementary school fence. in which no one was harmed.

#BREAKING 3 people are confirmed dead in what witnesses are calling a wrong-way crash on Northbound 805. pic.twitter.com/QeMX7NF6H2

A witness, motorist Mariwan Hama, told The Los Angeles Times that Heitmann's car exploded and that no help was possible for the  victims: “[people] were trying to help him, he was raising his hand, and they were just surrounding him.”

Heitmann was officially identified on Saturday as the driver of the McLaren speeding the wrong way on a busy highway. The dead teen was better known to online followers as McSkillet, a YouTube gamer who designed and sold 'skins' to change the appearance of weapons in the first-person shooter game Counter-Strike: Global Offensive.

Heitmann, as McSkillet, had an estimated 900,000 YouTube followers. His last video came out some six months ago, prior to being banned by the game developer Valve, after the discovery of illegal gambling involving custom content, according to the Independent.

Heitmann's December 2017 video shows the same McLaren that crashed on Saturday. Prior to the fatal crash, Heitmann’s father called local police saying that his son had sped off with the supercar, hitting another family car in the process. Those claiming to be friends with the McSkillet told the Independent that the teen had been struggling with mental health issues before the fatal incident.

It is not known whether the Heitmann family will recompense the family and loved ones of Pizarro and her daughter.