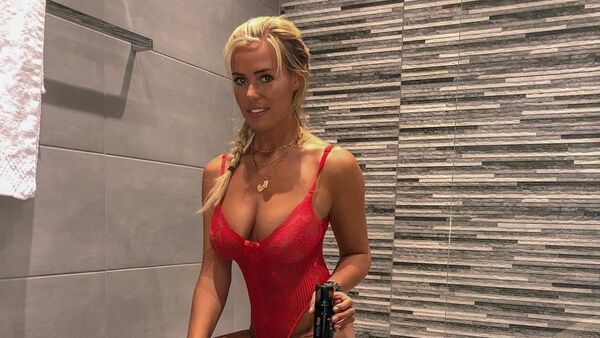 Hot blonde Chloe Meadows is widely known for her natural beauty, but this time her plunging neckline has raised questions.

The 25-year-old TOWIE cast diva and popular Instagram bombshell Chloe Meadows had taken to Instagram to promote cosmetics, but everybody’s eyes were apparently fixed on her high-cut lingerie, with a red one-piece vividly showing off the model’s cleavage.

Keeping my holiday tan up using @minetanbodyskin sold in @bootsuk 💃🏼

However, not all of her fans shared flattering comments. Some rushed to question Chloe’s natural beauty, suggesting she may have had a boob job.

"Have you had your boobs done?" one follower quipped, while another compared her shape to a “Baywatch figure.”

Chloe earlier admitted that she had floated an idea to go under the knife a short while after joining the reality series “The Only Way Is Essex” in 2016, but she has apparently chosen to retain her natural looks.

Such a lovely day at Epsom races, thank you so much to @chichiclothing for this beautiful dress and a brilliant day 🐎 🦋 and apparently I’m really good at betting! I won!!!!!!