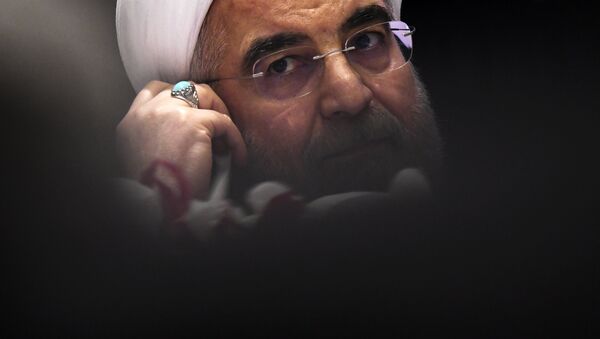 "The State Department’s new ‘Iran Action Group’ is nothing more than an attempt to bypass the [agency’s] civil servant experts to implement [Secretary of State Michael] Pompeo’s dangerous vision to destabilize Iran and close off diplomatic ramps," the statement said on Thursday.

World
US Unveils 'Iran Action Group' for Post-Nuke Deal Policy
Earlier in the day, Pompeo announced the creation of the Iran Action Group that will be responsible for overseeing the Washington’s response to what he called are Tehran’s destabilizing activities.

Pompeo said the group will effectively coordinate efforts to counter Iran’s behavior and change it while addressing all manifestations of threats by Tehran.

NIAC urged the US government to change its course on the nuclear accord and return to the diplomatic table.

"[The US government should] end the outrageous ban on Iranians obtaining visas, and mitigate the snapback of sanctions that hurt the Iranian people and many in the United States," the statement said.

Pompeo Vows to 'Enforce' US Sanctions Against Iran - Reports
In addition, NIAC accused the United States for seeking to sabotage the Joint Comprehensive Plan of Action (JCPOA), more commonly known as the Iran nuclear agreement, which the group characterized as a "successful nonproliferation agreement."

In May, President Donald Trump announced that the United States would exit the JCPOA, which stipulates the gradual lifting of the anti-Iran sanctions in exchange for Tehran maintaining the peaceful nature of its nuclear program. The remaining parties to the nuclear agreement — the European Union, China, Russia, France, Germany and Great Britain — have denounced the US move and committed themselves to preserving the deal.