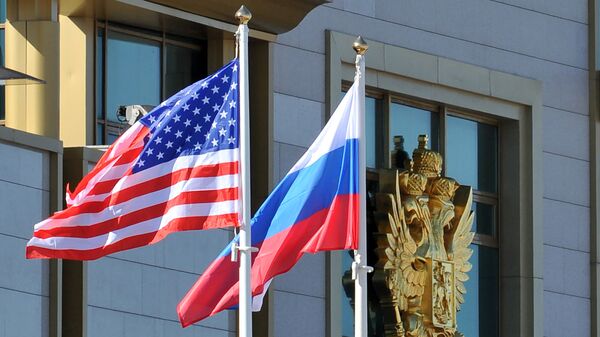 On Wednesday, the US State Department rolled out two rounds of anti-Russia sanctions over the Skripal affair. The first set will be implemented August 22 and the second round three months later unless Russia agrees to chemical weapons inspections.

Russian Federation Council's Foreign Affairs Committee Chairman Konstantin Kosachev on Thursday said the new US sanctions will harm bilateral relations just days after he agreed with Senator Rand Paul to send a delegation to Washington. On Wednesday, Paul said he delivered a letter from Trump to Russian President Vladimir Putin's administration about how the two countries could work together in many areas.

Russia
Russian PM Compares Further Anti-Moscow Sanctions to Economic Warfare
"This baseless ‘finding’ by the State Department, with heavy pressure from [US] Congress, appears to be an attempt to blunt any possible progress towards better relations with Moscow stemming from Senator Rand Paul’s visit and his delivery of Trump’s letter to Putin," Jatras said on Thursday.

A State Department official told reporters on Wednesday that the first round of sanctions target security-related exports while the second includes measures such as restricting bank loans, suspending Aeroflot flights, banning almost all exports, and downgrading diplomatic relations.

Trump’s enemies, Jatras added, within the bureaucracy — including some of his own appointees — are trying to undermine the president’s overtures to Moscow "and further erode his executive authority."

"Besides blocking every possible path to rapprochement with Russia, this is another step to setting Trump up for removal from office," he said.

Jatras acknowledged that the harsh second set of sanctions that have been announced looked almost certain to be imposed after the November midterm congressional elections.

"It’s hard to see at this juncture how that will be avoided. Russia will not submit to inspections, which the US is arrogantly demanding, as if she were some pipsqueak country like Libya," he said.

Analysts on How US Anti-Russian Sanctions May Affect Ruble, Foreign Investors
Jatras noted that the Organization for the Prohibition of Chemical Weapons (OPCW) certified in 2017 that the Russians had completely destroyed 100 percent of their chemical weapons stockpile while the United States still had almost 10 percent of theirs, which are not expected to be gone until 2023.

"In the absence of capitulating to the US demand, which Russia will not do, legally Trump can waive the sanctions," Jatras said. "But I believe this is part of the political trap being laid for him."

If Trump waives the sanctions he risks further hyping the charges of treason against him as well as inviting new legislation passed by a margin he cannot veto, Jatras warned.

"If the harsher measures go into effect in November, it is hard to overstate how dangerous that will be. These are the kind of things that countries do just one step from totally breaking diplomatic relations in advance of war," he said.

Downgrading diplomatic relations, Jatras added, would likely mean withdrawing the US ambassador from Moscow and expelling the Russian ambassador in Washington while maintaining relations — if at all — at the charge d’affaires level.

The new sanctions were reckless, dangerous and unjustified, Jatras stressed.

"In a word, this is insanity. What’s perhaps worst is that this political warfare is being conducted with a total disregard for the truth, much less an honest attempt to find it," he said. "It’s worse than a presumption of guilt — it’s a positive, unambiguous verdict of guilt."

On Thursday, Kremlin spokesman Dmitry Peskov said Moscow considers Washington's new anti-Russia sanctions tied to the Salisbury attack to be unlawful and unacceptable. Moscow was holding off on its response until Washington clarifies the move, he added.

On March 4, Skripal and his daughter were found unconscious on a bench at a shopping center in Salisbury. The United Kingdom and its allies have accused Moscow of having orchestrated the attack with what UK experts claim was the A234 nerve agent, without presenting any proof. Russian authorities have refuted the allegations as groundless.