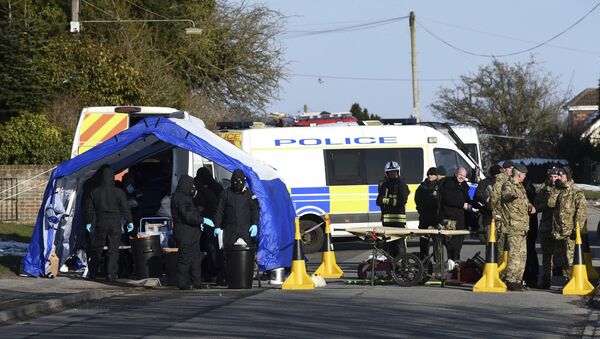 © AP Photo / Ben Birchall/PA
Subscribe
International
India
Africa
Russian Embassy to the United States has slammed the newly-announced by the US State Department sanctions against Moscow, bases on baseless accusations of the involvement in the Salisbury posion attack incident.

The Russian Embassy to the United States said that Washington presented no evidence of Moscow's role in Salisbury poisoning, adding that the US claims were far-fetched.

The Embassy also noted that Russian had affirmed to the US State Department that it continued to "strongly stand for an open and transparent investigation" into the Salisbury case. The embassy said that the newly-announced sanctions were "draconian".

US Imposing Sanctions on Russia Over Skripal Poisoning - State Department
The diplomatic mission accused the United States of an "assembly line" style of imposing unsubstantiated sanctions on Russia and refusing to communicate.

Meanwhile, addressing the issue, the Russian Representation to the Organization for the Prohibition of Chemical Weapons (OPCW) stressed that no hard evidence has been presented in order to support the serious accusations directed against Moscow, which have triggered sanctions and a diplomatic clash between Russia and Western countries.

"Collective West in the so-called #Novichok drama acts as a prosecutor, judge and hangman at the same time. Why should prove its innocence and not the other way round? 5 months later the question remains: has any evidence been presented? The answer is obvious — no," the Russian mission wrote on Twitter.

Earlier, the US Department of State announced in a press release new sanctions on Russia on the basis of the allegations of chemical weapon use by Moscow against former Russian intelligence officer Sergei Skripal and his daughter Yulia in the United Kingdom and demanded that Moscow allow international on-site inspections.

World
EU Firms Free to Decide on Activities in Iran Amid US Sanctions - EU Commission
A senior State Department official said in a conference call with reporters on Wednesday that the first wave of sanctions will take effect on or around August 22 and will ban licenses for exports of sensitive national security material to Russia.

State Department spokeswoman Heather Nauert said Washington had determined that the Russian government had used "chemical or biological weapons" against its own nationals in violation of international laws.

The UK prime minister’s office had welcomed the new batch of US sanctions on Russia.