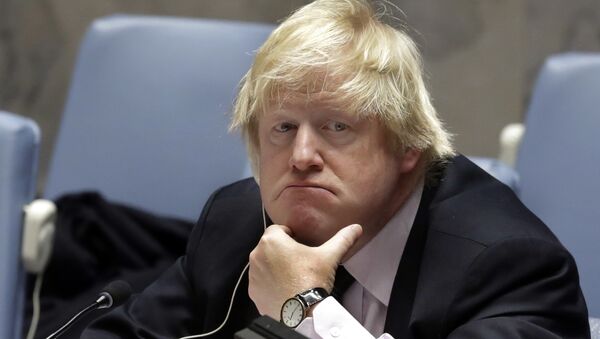 Sputnik discussed with political commentator Qanta Ahmed and media personality Katie Hopkins the fierce backlash triggered by UK's former Foreign Secretary Boris Johnson over his remarks about Muslim women in burqas, whom he compared to "letterboxes" and "bank robbers."

Sputnik: Do you believe that Boris should be punished for his comments on the Burqa and Niqab or not?

Qanta Ahmed: Not at all. I've found it astonishingly scandalous all the hysteria surrounding satirical remarks that were not at all malicious, rather than the outrage of normalizing the niqab in British society. I realize that Mr. Johnson is not in favor of banning the niqab in Britain, for all of the reasons he stated.

The concern that I have is that the full face veil is becoming normalized in Western Europe and in Britain, when it has no basis in Islam. There was even a letter in the times from a prominent Muslim Imam in Oxford, explaining that Mr. Johnson did not go far enough and this normalization of covering the face, which is a hallmark of militant fundamentalism and neo-orthodoxy; it has no basis in the Qur'an. There is no recommendation in the Qur'an for women to become erased from the public space in this manner. Of course, you know that this was the symbol of the Taliban and Daesh, it's astonishing that British liberal intellectuals are rising to the defense of this aberrant practice.

I hope Mr. Johnson stands his ground and does not apologize, but perhaps reaches out to experts who understand the concept of the niqab in the context of political Islam, and it could be an opportunity for Mr. Johnson to deepen his knowledge.

READ MORE: Boris Johnson to Be Probed for Alleged Breach of Tory Code of Conduct - Reports

Katie Hopkins: Absolutely not, having gone around the UK and looked at data and polls, 60% of people agree that Boris Johnson was right to say what he said and they don't disagree with him.

Boris's article was actually saying that we shouldn't ban the burka and supporting women being able to wear it if they wanted to. This message has been completely lost in all the outrage and now he will face a formal investigation by the Conservative party into his comments. The majority of Conservative voters are backing Boris, but the party is determined to make it look like they are punishing him. It's a bad move by them and most people are rallying behind and we are very much hoping that he doesn't apologize.

Sputnik: Why do some Muslims in the West insist on covering their faces?

Boris the Victorious: Poll Suggests Johnson Should Be Next PM After Theresa May
Qanta Ahmed: It's a symbol of rejection of the secular world and a separatist move, a desire to be seen as another, an apart, not an integrated member of society. Particularly it's very interesting that it's being adopted by younger British Muslims, whose mothers may not adopt this, it's almost like a symbol of the militancy de-jure and it is an indoctrination coming from Islamism and neo-fundamentalism.

Sputnik: Is political correctness out of control in the UK?

Katie Hopkins: I think absolutely that political correctness is out of control. The two big points from me are this. Ok, Boris writes an article, he says that the niqab makes people look like letterboxes and says it makes people look ridiculous, but says we shouldn't ban it. But at the same time at this moment in history, brave women in Iran are removing their headdresses and defying the Islamic regime, in order to fight for their freedom and they are being arrested and often disappeared by the state, for being so brave.

The other point, of course, is that what's actually going on here, it isn't a criticism of the burka, because Boris was actually in support, it's that you are no longer allowed to criticise Islam in the UK and that makes us Sharia compliant. That means in the UK 2018, it is now not acceptable to criticise Islam and this is a very dangerous proposition for regular people in the UK and it's not something any of us are enjoying.